ElringKlinger’s headquarters in Dettingen/Erms will also be home to EKPO Fuel Cell Technologies. Initial series production of up to 10,000 stacks per year will be possible there.

Hydrogen is set to play a pivotal role on the road to decarbonization. Confident of the promising future associated with this sustainable source of energy, ElringKlinger and Plastic Omnium have agreed to push ahead forcefully with hydrogen-based fuel cell technology. Operating through a joint venture by the name of EKPO Fuel Cell Technologies, the companies will team up in an effort to develop, manufacture, and market fuel cell stacks and components.

It all began on the fringes of an IAA motor show in Frankfurt. ElringKlinger had already invited Plastic Omnium to an initial meeting at the trade fair. Taking up this invitation, the French delegation headed by Laurent Burelle, majority shareholder and then CEO of Plastic Omnium, and Félicie Burelle, then Head of Strategy & Development and now Managing Director, visited ElringKlinger’s booth at the show. During discussions that involved ElringKlinger CEO Dr. Stefan Wolf, Head of Fuel Cell Technology Armin Diez, and Head of Global Strategy, M&A, and Innovations Dr. Gernot Stellberger, those attending the meeting soon realized that the companies not only had similar structures but also shared the same values. Both corporations are listed on the stock exchange, but have families as strong anchor shareholders. What is more, both companies have a clear vision of emission-free mobility: hydrogen will be an essential energy carrier of the future.

On this IAA meeting, both partners were equally enthusiastic about their shared awareness and agreed on further rounds of negotiation to sound out and define a joint approach. Dr. Gernot Stellberger led the discussions on behalf of ElringKlinger. His counterpart at Plastic Omnium, Marc Perraudin, CEO of Plastic Omnium New Energies, joined the project task force in early 2020 after the initial groundwork had been laid. This turned out to be a fortunate coincidence, as both men knew each other from earlier collaborations. “This gave us a tremendous sense of trust in each other, which proved beneficial to the subsequent workflow,” Stellberger recalls. “We didn’t have to spend time on figuring out what makes the other person tick,” adds Perraudin. “Instead, we were able to focus fully on our common goals.” As part of this process, both maintained a close dialogue with their respective CEOs. Both Dr. Wolf and Laurent Favre, now CEO at Plastic Omnium, were always kept fully briefed on the individual steps of the project.

The initial task for Perraudin and Stellberger involved defining the companies’ common views on mobility. Both Groups are of the firm opinion that the hydrogen-based fuel cell represents the next generation of drive technology. Both realize that large-volume production will make this particular solution more appealing, as economies of scale help to reduce the overall price per unit. Initially, the strengths associated with this technology are likely to come to the fore primarily in the commercial vehicle sector. After all, a battery-powered truck would probably have to stop at a charging station on several occasions to complete its tour in the case of long-distance travel or delivery routes that have a particularly demanding profile. However, recharging also means idle time for the forwarder and thus additional costs. Alternatively, the battery fitted to a truck could be dimensioned in such a way that fewer recharging stops are required.

In this case, however, the forwarder would be faced with additional costs or less profit due to a smaller payload. Trucks powered by fuel cells, by contrast, are capable of resolving this conflict. The power needed is generated on board, which translates into greater distances covered and the avoidance of lengthy downtime. Refueling is unlikely to take much longer than before. Even if it takes twice as long, truck drivers will certainly not be held up for an hour or more, as they would be in the case of battery recharging.

“Based on this common understanding, we then went on to identify the strengths that each partner can contribute and planned the next stage,” Stellberger explains. “It was clear that we wanted to work in very close collaboration to cultivate the fuel cell market.” Agreement was reached on a joint venture for stacks and components. At the same time, Plastic Omnium would acquire ElringKlinger’s Austrian subsidiary for the purpose of establishing a focus on systems. ElringKlinger possesses the technology needed for reliable components and high-performance stacks and was prepared to contribute it accordingly. The emphasis for Plastic Omnium, meanwhile, is on supporting the joint venture in an effort to expand production capacity and accelerate market penetration. The company based in Levallois near Paris will provide a total of EUR 100 million for this purpose. “Our joint venture has access to outstanding technology. It is equally important that customers are made aware of this quickly and in as compelling a manner as possible,” says Perraudin in explaining the objective of the cooperation.

The CEOs of the two partners, Laurent Favre (r.) and Dr. Stefan Wolf (l.), jointly signed the partnership agreement at the end of October 2020. 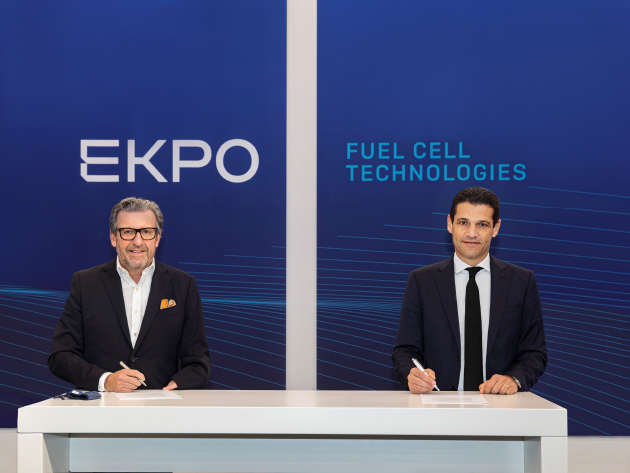 A key objective of the joint venture is that it should be able to grow rapidly. “We see tremendous potential in Asia in particular,” Stellberger notes. “Here, many manufacturers in the bus but also in the passenger car segment have already clearly committed themselves to fuel cell technology.” Toyota and Hyundai, for example, already offer mass-produced cars fitted with fuel cells. This approach is also being supported by various governments. China, for example, is promoting fuel-cell-powered buses through state funds with a to view to also advancing technologies beyond those associated with battery power. This is clearly underpinned by a commitment to diversity in drive technologies for the various fields of application.

Public-sector support in Europe, by contrast, has been slower off the ground. Recent efforts include the National Hydrogen Strategy adopted by the German government in 2020. It covers a volume of EUR 9 billion, while a similar program launched in France is worth EUR 7 billion. The Franco-German alliance between ElringKlinger and Plastic Omnium is also counting on these state-led efforts to help fuel cell technology achieve its breakthrough. “Companies – often supported by funding programs – have taken a leap of faith when it comes to developing technologies. Now all players are called upon: it is imperative that the associated infrastructure and hydrogen production be built up quickly,” says Stellberger. One of the key advantages is that the existing filling station network can be used for this purpose. “Retrofitting will not be cheap. But such aspects have to be put into perspective. The decentralized infrastructure of recharging stations – with a sufficiently powerful grid – required for battery-powered vehicles is also expensive,” Stellberger continues.

Having agreed on the framework conditions of the joint venture, the final task was to find a suitable name. “We were adamant that the name should be representative of the contributing partners as well as the technology involved,” says Perraudin in explaining the solution swiftly found by the team. “EKPO Fuel Cell Technologies” was born as a brand – ready to conquer global markets. The business plan drawn up for the joint venture envisages rapid growth by the end of the decade: the company is targeting a market share of 10 to 15% by 2030, with sales revenue totaling EUR 700 million to 1 billion. “It’s ambitious, without doubt,” they both agree. “But, then again, our technology and our shared vision of next-generation mobility are a convincing proposition. 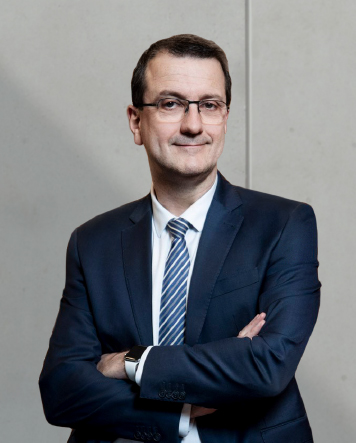 Marc Perraudin has been with Compagnie Plastic Omnium since 1995 and has headed the Plastic Omnium New Energies division since March 2020. Previously, he was primarily responsible for R&D and business development within the Group. 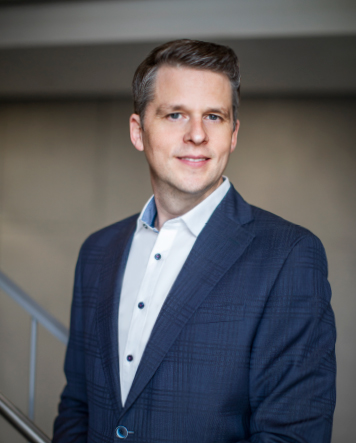 Dr. Gernot Stellberger joined ElringKlinger in 2017 and is Head of Global Strategy, M&A, and Innovations. In the spring of 2021, he was appointed as one of three general managers of EKPO Fuel Cell Technologies.
1.FRANCO-­GERMAN ALLIANCE – WHY WILL THE PARTNERSHIP BETWEEN ELRINGKLINGER AND PLASTIC OMNIUM WORK?

Perraudin: Plastic Omnium, a French group, has been working with German companies for many years – both in customer relations and through joint ventures or technological partnerships. In addition, we have established a strong presence throughout Germany, reflecting the country’s position as a technology leader in the automotive industry. Against this backdrop, it was almost a foregone conclusion that the two partners Plastic Omnium and ElringKlinger would be brought together – given their identical corporate culture, the companies’ innovatory prowess, and a shared vision of the future of mobility.

Stellberger: Franco-German cooperation has become something of a tradition and always works when both actors respect each other and see themselves as partners on an equal footing. That is the case here. Against this backdrop, ElringKlinger and Plastic Omnium are the perfect match: they have a very similar corporate culture and the same ownership structure; both have a dynamic organizational set-up and clearly defined, uncluttered decision-making channels. These are essential success factors that should by no means be underestimated. When we first met at the IAA motor show it was obvious that the chemistry was right.

2.WHAT WAS YOUR BIGGEST CHALLENGE ON THE PATH TO THIS PARTNERSHIP?

Perraudin: Arranging a joint venture is always a challenge. A successful partnership is based on a shared vision, but also on mutual trust, fairness, and respect. We displayed these credentials at all levels of the two companies – from the very beginning and at every stage of the talks. That was the key to success.

Stellberger: Without doubt, the coronavirus pandemic with all its repercussions. If it hadn’t been for our successful efforts to establish a basis of trust as part of various meetings held in Germany and France during the initial stages leading up to March 2020, the entire project would have been much more difficult and, above all, significantly more protracted. In some ways, after all, the physical presence of team members is essential to managing complex processes such as these. But we fully met our targets in terms of project timing and substance – not even covid-19 managed to prevent us from doing so.

Perraudin: EKPO Fuel Cell Technologies will be a game changer from day one: a unique technological offering, market-ready products for next-generation mobility, decades of technological and industrial expertise from ElringKlinger, and production capacity already in place. Building on this foundation and benefiting from the clout of both partners and the significant investment opportunities, we believe that the venture is destined to take a leading role within the market. Hydrogen-based drive systems will become reality and EKPO Fuel Cell Technologies will be the world’s principal player in fuel cell stack technology.

Stellberger: By 2030, fuel cell technology will have become fully established. Mobility will be driven by a mix of different propulsion technologies, with infrastructure and cost-benefit factors playing a key role. It is precisely here that fuel cells will be able to excel. Initially, for commercial vehicles, trucks, and buses, but later also in the passenger car segment. In this environment, EKPO Fuel Cell Technologies will be a brand name that stands for one of the leading fuel cell players worldwide. We will play a pivotal role in shaping the process of transition within the mobility sector and will pursue the goal of decarbonization by driving our technology forward at full throttle. That is our ambition.