As an energy source for the future, hydrogen is solely made up of protons and electrons. In the case of a PEM fuel cell, hydrogen is broken down into electrons and protons on the anode side; the electrons travel outside of the cell to the cathode side via an appliance (e. g., a battery storage device or electric motor), while the protons migrate through a polymer membrane and react with the oxygen on the cathode side to form water. The water produced, which is emission-neutral, is then discharged from the cathode in liquid or vapor state. This, in particular, is what makes hydrogen a fuel of the future.

The world’s major automotive markets are banking on hydrogen. In 2016, the Chinese government included the objective of promoting the hydrogen industry in its plan for the period up to 2030. In Europe, meanwhile, governments are announcing national strategies aimed at establishing hydrogen technologies as part of the transformation in the energy and mobility sector, ring-fencing substantial funding in the process. Similar initiatives are reported in North America. For around 20 years, ElringKlinger has been successfully undertaking research into fuel cell technology, a field in which the company perceives significant potential for the mobility of the future. What are the specific properties of hydrogen? Why does hydrogen make a good source of energy?

Hydrogen is first on the list: in the periodic table of elements, hydrogen (represented by the symbol H) is top left with atomic number 1. As the chemical element with the lowest atomic mass, hydrogen only exists as a molecule under the conditions that prevail on earth – hence the symbol H2.

Hydrogen is common, one feature that fossil energy sources cannot claim. Crude oil and natural gas are finite and scarce, and the methods used in their extraction are becoming ever more challenging and complex. Hydrogen production is also energy-intensive, which means sustainable electricity generation is an essential element in developing a hydrogen industry.

From an environmental technology point of view, hydrogen has one major advantage: it can be used for mobility or heating applications just as a fossil energy source would be, but without emitting carbon. In the long term, hydrogen also promises industrial uses. Hydrogen therefore offers considerable potential in terms of slowing climate change through decarbonization. 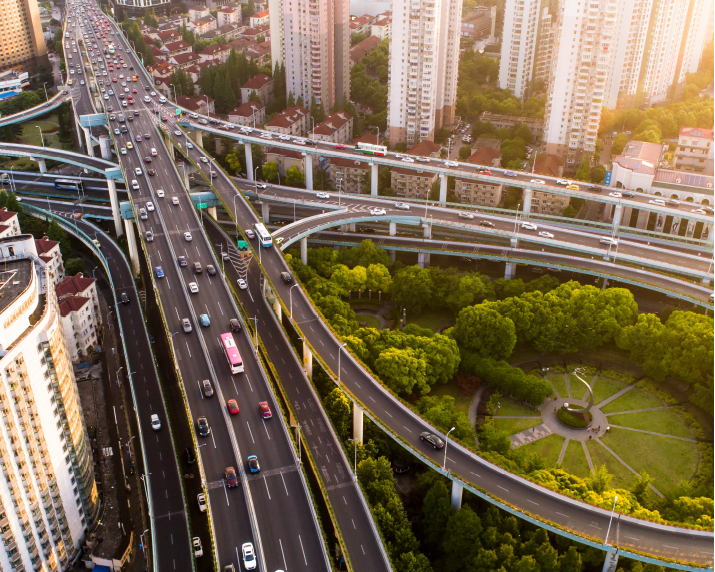 Demand for mobility in China, the world’s lar­gest mobility market, is continuing to rise.
Trucks and buses are particularly suitable applications for hydrogen-powered fuel cells. 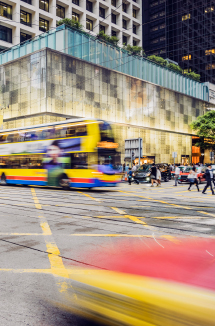 Since it is available regardless of the weather or the time of day, hydrogen outshines other environmentally friendly forms of energy production such as wind power and solar energy. Hydrogen is not a primary energy source in its strict sense, though – energy is needed to produce hydrogen in the first place before it can be used for the desired purpose; for this reason, it is often thought to be less efficient than the direct utilization of electricity. This, however, overlooks the fact that unlike electricity, hydrogen can be stored. Whereas batteries discharge over time, hydrogen enables us to produce the energy needed within the vehicle itself, without any being lost. The major advantage here is that the time and the place of production can be independent of hydrogen usage. Hydrogen can also be transported via pipelines or in liquid form, which makes a difference where long distances are involved or energy needs vary considerably over the course of time. Other potential uses of hydrogen include aircraft, ships and trains, and (passenger) transportation by road. 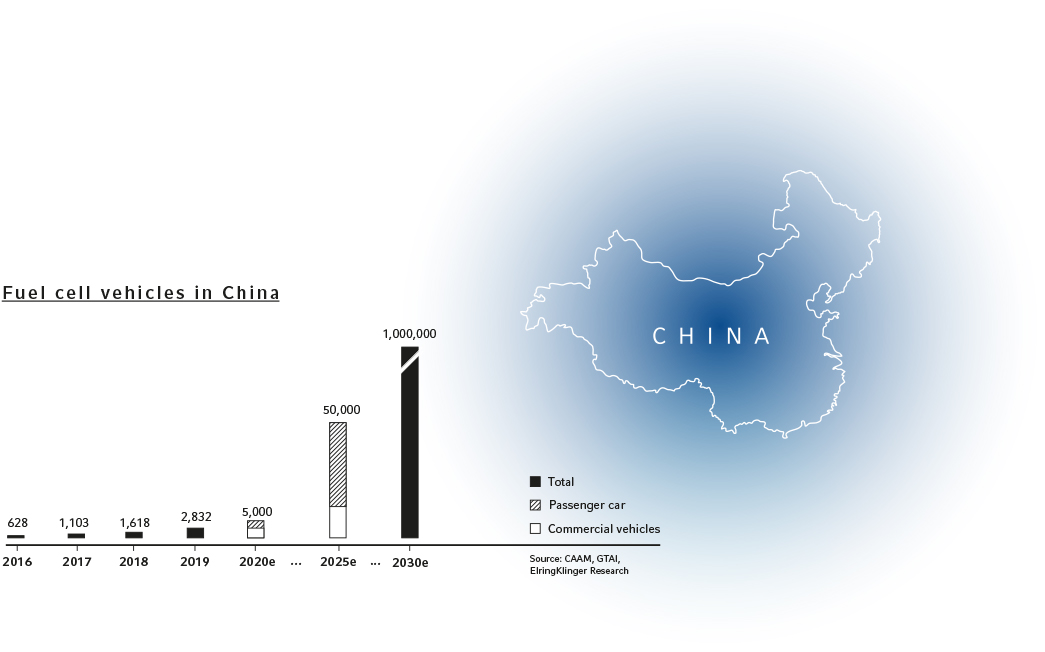 As early as 2016, China published its energy policy guidelines for the coming 15 years. The country’s 13th five-year plan envisaged an industrial performance aimed at reducing Chinese society’s greenhouse gas intensity to 60% by 2030. Restating this vision in 2020, President Xi Jinping declared the objective of making China a climate-neutral state by 2060. Included in the road map are fuel cell vehicles, a field in which China is looking to become competitive as it aims to sever reliance on fossil forms of energy. To this end, the government announced a wide-ranging funding program in which the value chain for fuel cell vehicles will be as significant as the establishment of a hydrogen industry. Regions will be able to apply for the main programs.

The state also plans to showcase its technological pre-eminence at the 2022 Winter Olympics in Beijing. In Zhangjiakou, for example, the current fuel cell fleet of 174 buses will be expanded to some 1,500 vehicles.

Having taken this first step with commercial vehicles, China plans to install fuel cells in automobiles. By 2025, it is anticipated that four times as many cars as commercial vehicles with a fuel cell drive will be on the roads – something many manufacturers have been preparing for over many years. China remains the market of the future.

It all adds up to huge potential for the mobility sector. Basically, deriving the electricity needed to produce hydrogen from renewable sources enables vehicles to be powered in a completely carbon-neutral way. In particular, excess wind, hydro, or solar energy can be used throughout daylight hours to produce hydrogen. Existing pipelines can then be used to, for example, supply hydrogen to caverns in northern Germany for storage.

In order to widely utilize stored hydrogen for mobility purposes, one can fall back on the existing infrastructure of filling stations. Studies indicate that of the 14,000 or so filling stations in Germany, around a thousand would need to be modified for hydrogen to ensure a nationwide supply. This means a decentralized structure (such as that supporting purely battery-driven vehicles) is not required. 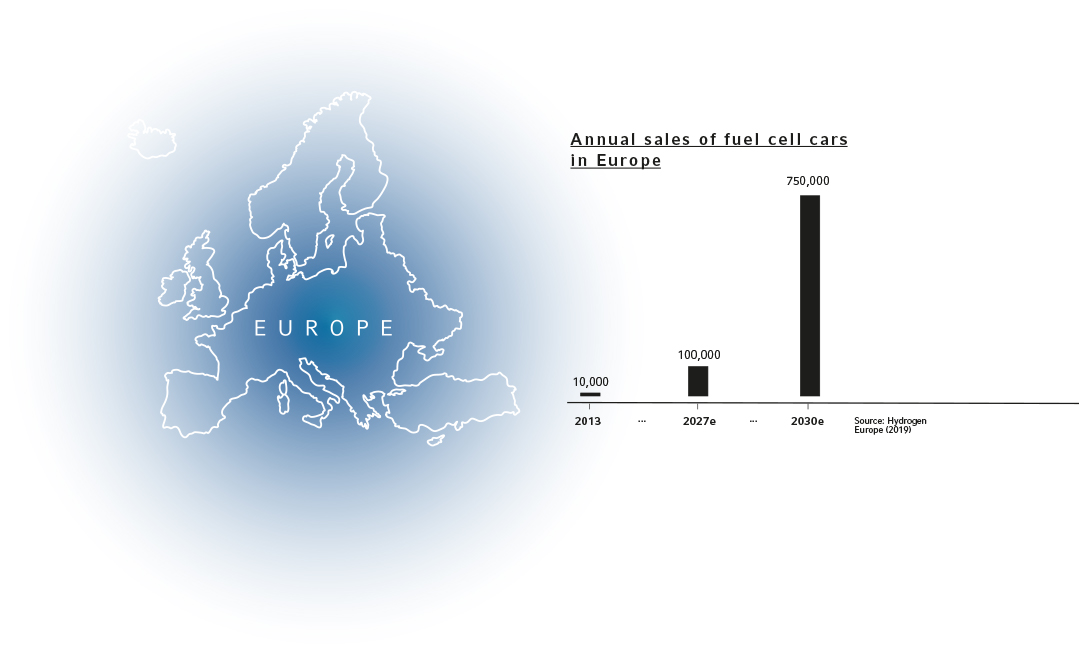 Fuel cells are becoming established as the basis for alternative drive systems in Europe as well as China, with many EU states launching wide-ranging funding programs. Germany, for instance, has earmarked EUR 9 billion to activate the market and boost hydrogen technologies, while France has committed EUR 7 billion to a similar program; Spain plans to invest some EUR 9 billion, with Italy investing as much as EUR 10 billion and Austria approving EUR 2 billion.

Studies suggest that in Europe fuel cell technology will be installed in buses and trucks initially and in automobiles at a later date. The benefits in terms of refueling times and range, and the cost-benefit ratio this implies, will drive this development. By 2030, for example, it is expected that one in five taxis will be fitted with fuel cells.

Making use of the existing filling station network will not radically transform mobility habits. Drivers would go to a gas station to take the energy source on board, just as they do now; the fueling process would be similar to that for familiar fossil energy sources and also take a matter of minutes. Compared to purely battery-driven vehicles, which take around 20–30 minutes to charge at rapid-charging stations, idle times are significantly lower.

This makes hydrogen-powered fuel cells an interesting prospect for certain applications. Wherever time is money, the advantages of the fuel cell come to the fore. In the heavy goods area especially, where operating costs are critical, a fuel cell offers all the benefits of an efficient drive technology. Ultimately, manufacturers will need to make a choice between a solely battery-driven or a fuel-cell-based drive. Given that the manufacturing processes for synthetic fuels have a low efficiency level, these technologies will be reserved for specific applications. Using batteries alone to supply the drive for a truck is less cost-effective than utilizing a fuel cell. Either the battery is large enough to facilitate a long range while recharging frequencies and idle times are minimized for the carrier (in this case, however, the weight of the battery lessens the payload of the truck, meaning the carrier can only convey smaller loads); or the carrier chooses a smaller battery to maximize the available payload, forcing drivers to head for rapid-charging stations frequently, which has an adverse effect on operational time. 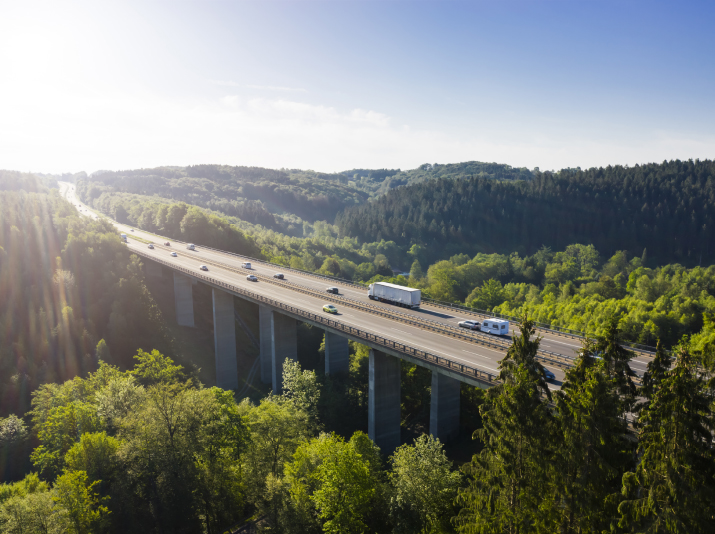 In the USA, the state of California has been pio­neering the use of fuel cell vehicles. 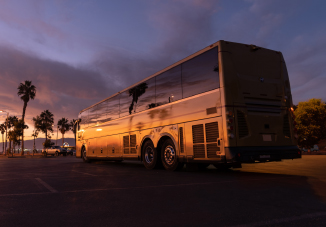 A truck powered by a fuel cell is not subject to these restrictions to the same degree. Refueling with hydrogen takes a reasonable amount of time (similar to that needed for fossil energy sources), payload is not limited and the range remains relatively high. Fuel cells thus constitute an excellent alternative in the case of commercial vehicles and buses, where the same arguments apply.

Given the advantages that fuel cells offer for these particular applications, they are gaining ever more ground and production is poised to increase in the next few years. The resulting economies of scale will cut the unit prices of fuel cell stacks, which will duly become more attractive to the automobile sector from an economic standpoint. Fuel cells are also a good option for applications involving longer distances or certain vehicle sizes. In the automobile segment too, the boundaries defining the coexistence of the various drive types are shifting in favor of the fuel cell, underlining hydrogen’s status as a fuel for the future. 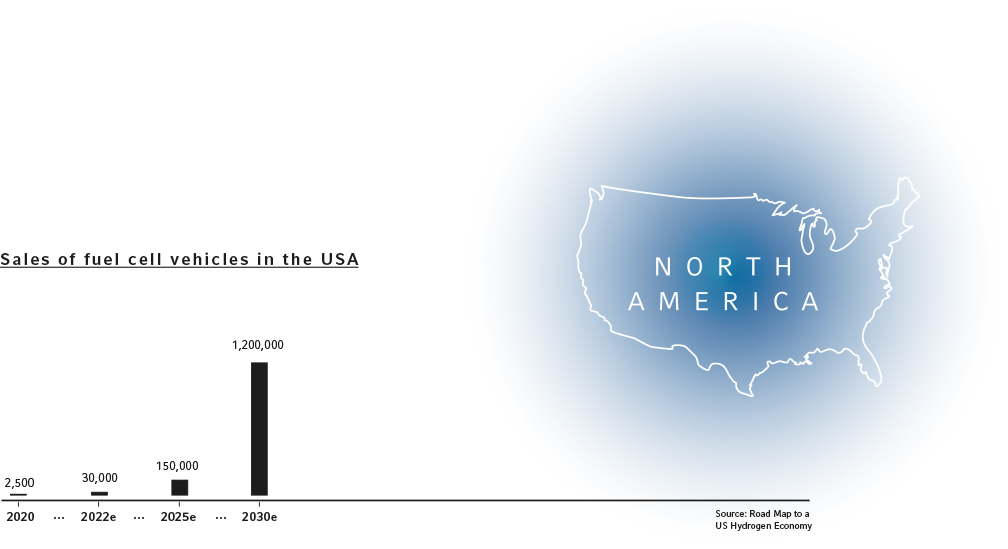 Driven by private-sector initiatives, a hydrogen industry is also likely to be established in the USA, with the main steps carried out in four phases. The immediate measures to be realized over the next two years will include the provision of research funds and implementation of initial applications (involving forklifts at logistics centers). In phase two, around the middle of the decade, comprehensive testing in relation to industrial applications will be carried out. Preparations will also be made to deploy hydrogen in the transport sector. In phase three, taking us to the end of the decade, the application fields will be diversified. Away from the roads, hydrogen will also be used to run trains and aircraft. From 2030 onwards, hydrogen will be utilized across a whole range of industrial applications. 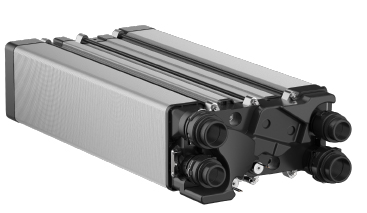 Fuel cell stacks like the NM12 from ElringKlinger can enable climate-neutral mobility on the road.