Turning up
the pressure

A new technology is ready for serial production at ElringKlinger. Thanks to an inno­vative hydroforming process combined with thermoplastic injection-molding, metals in cockpit carriers can now be replaced by plastic-metal hybrids. The first production lines have already commenced operations for one of Germany's premium manufacturers in China and Canada. What is more, a joint licensing agreement means ElringKlinger can now also offer the technology to other car makers. 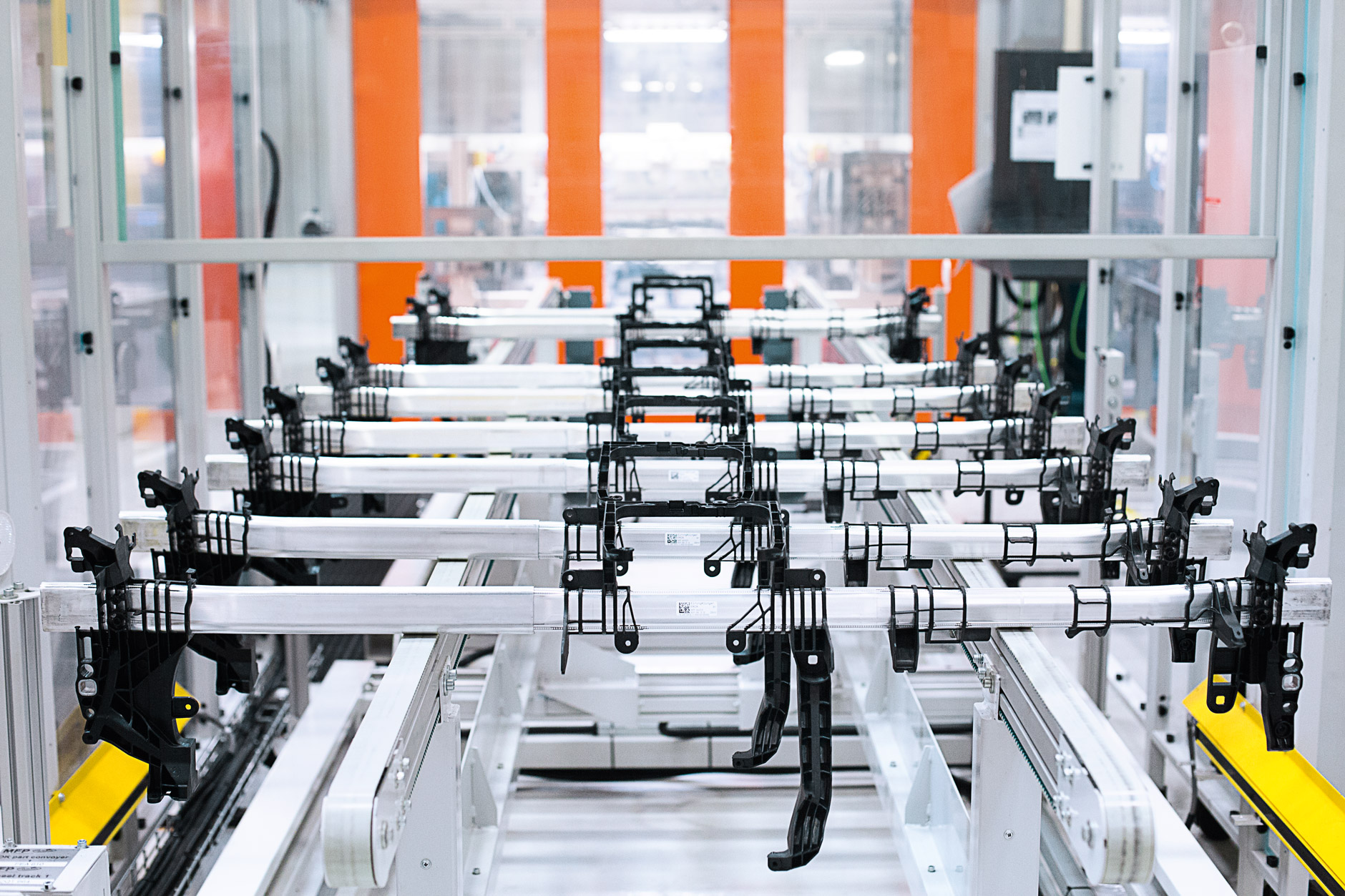 You can still hear the joy and excitement in his ­voice when Humphrey Chen talks about a sunny day in the fall of 2014. It was then that the head of ElringKlinger’s plant in Suzhou, China, and his team flicked the switch of a brand new production line for cockpit carriers. “When the first part came out of the machine and we saw the result of all our long, hard work, every single one of us was delighted,” recalls Chen. He and fifteen of his staff provided their professional support during the turnkey development of the production line in Germany with the aid of an Austrian sub-contractor. Toolmakers and process technicians underwent weeks of training in the use of the serial production tool at the company headquarters in Dettingen/Erms, ­Germany. Finally, they shipped the whole plant in fourteen huge containers to Suzhou, located some 100 kilometers west of Shanghai. Since early 2015, the factory has been turning out innovative lightweight parts in large numbers: cockpit carriers made out of aluminum and plastic, using ElringKlinger’s own patented production process.

Cockpit cross-car beams made with the help of hydroforming hybrid technology: the intelligent combination of plastic and metal
600 BAR
The hydroforming method involves injecting fluid into an aluminum tube at a pressure of 600 bar. As part of this process the tube is formed into the desired shape

This technology has a real future, particularly as lightweight vehicles consume less fuel and produce less carbon dioxide. With this in mind, ElringKlinger recently signed a licensing agreement for its hydroform ­hybrid technology – meaning it can now also offer it to other car makers. High-pressure molded hybrid parts such as cockpit carriers and front-end adapters not only weigh ten to twenty percent less than comparable parts made out of sheet steel. They also boast better shape and dimensional accuracy with minimal tolerances. This is particularly important in the case of cockpit carriers, where a host of different components are incorporated, such as the steering column, displays, and cockpit controls as well as the air-conditioning vents. Hydroform hybrid technology gives ElringKlinger a foot in the door of the fast-growing market for lightweight vehicle body and chassis components. 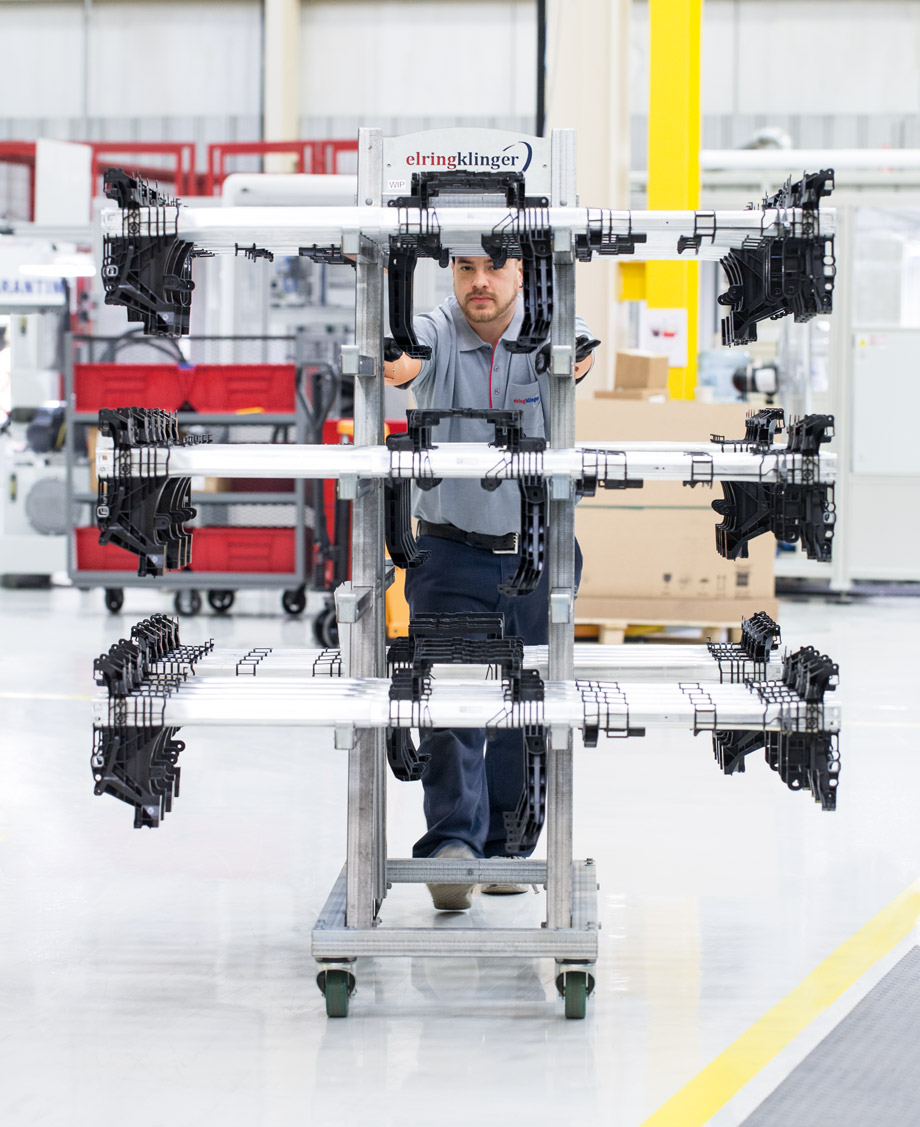 ”Several car makers have expressed an interest in our new lightweighting technology, and we are already at the development stage with some of them.“

“Several car makers have expressed an interest in our new lightweighting technology, and we are already at the development stage with some of them,” says Reinhard Müller, Head of the Plastic Housing Modules/Elastomer Technology division. “The speed with which we developed the technology to the point of serial production for our pilot customer is proof that we have the ability to offer this technology in other ­regions around the world.” In fact, a second production line has already been added to the first one at the Chinese factory in Suzhou, which also serves the German premium car maker in Asia. For its American and South African production, ElringKlinger also recently set up a production line in record time at the company’s Canadian location in Leamington. The first parts for that plant were delivered in January 2015, and ­serial production commenced in August of the same year.

11,000 KM
separate Leamington from Suzhou, two company sites at which the new production lines for HFH components have been installed. 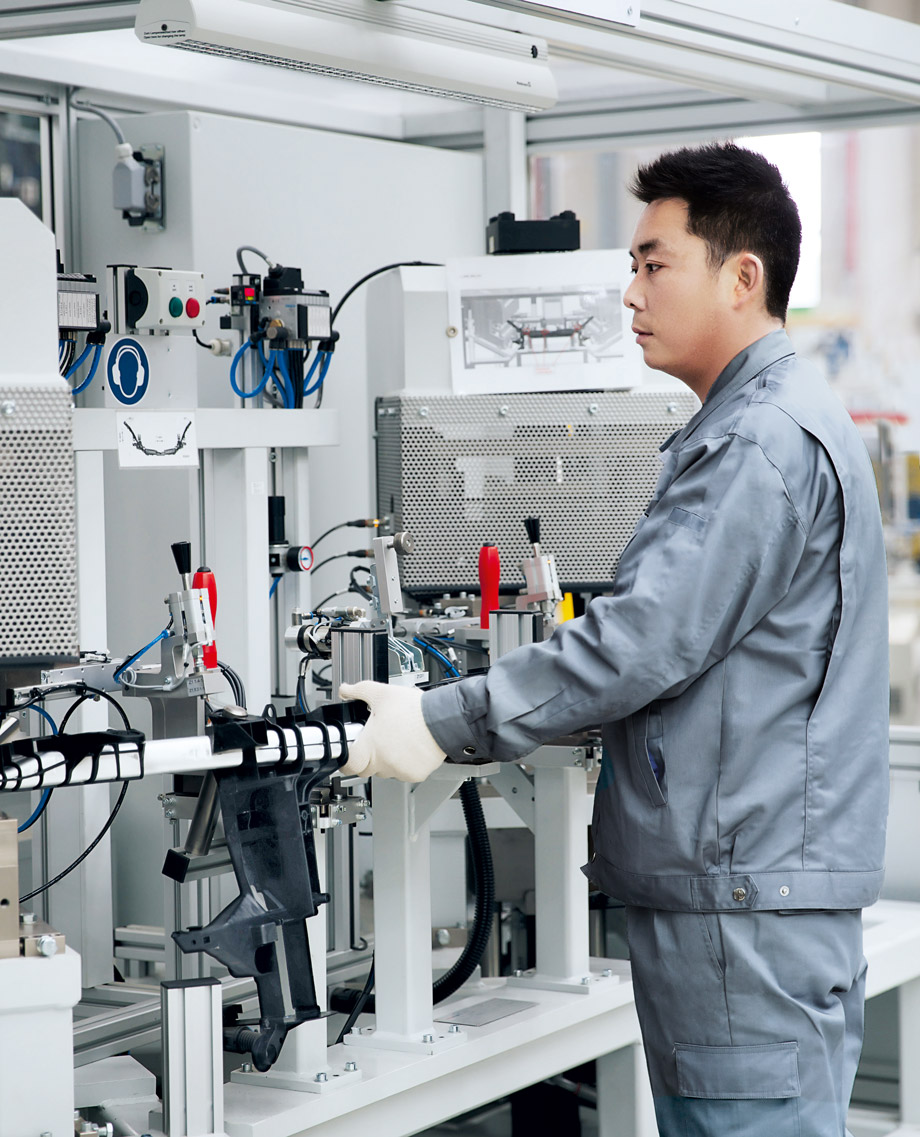 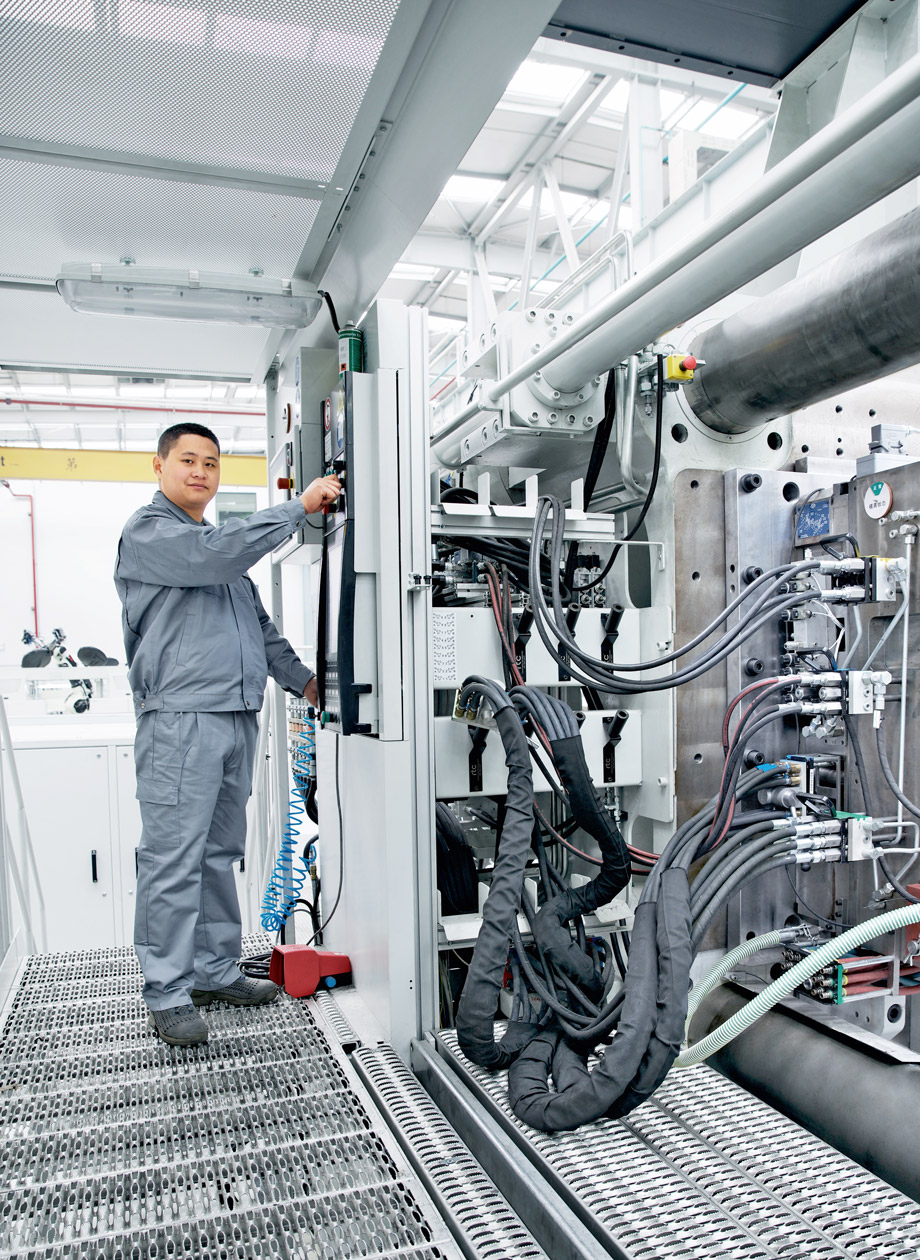 Close collaboration: The team in Leamington bene­fited from the hands-on experience gained by their colleagues in Suzhou when establishing the production line in China. 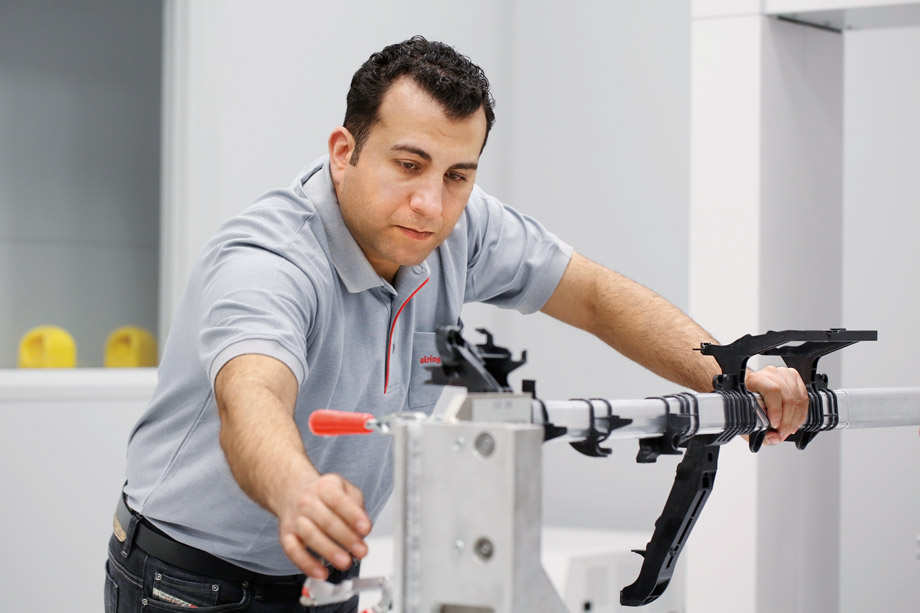 ElringKlinger was able to benefit in Canada from the experience it had gained in developing the production line in China. “We worked very closely with the pro­ject management team in Dettingen, our Chinese colleagues, and our customer, which enabled us to achieve start of production five months earlier than originally planned,” says Thomas Bächle, Plant Manager in Leamington. Bächle and his team first adapted an unused part of the building, covering 2,000 square meters, where cylinder-head gaskets used to be produced. Then they installed the individual parts of the plant: the forming tools developed by tooling specialist Hummel, a subsidiary of ElringKlinger, as well as injection-molding machinery and robots delivered by an Austrian supplier. The assembly cells, where the hybrid parts are finished after being shaped, also play an important role in the process.

”We worked very closely with the project management team in Dettingen, our Chinese colleagues, and our customer, which enabled us to achieve start of production five months earlier than originally planned.“

With hydroform hybrid technology, a dual-purpose tool is used within the injection-molding machine to combine internal high-pressure forming, i.e., hydroforming, with plastic injection-molding. First a thin-walled aluminum tube is mechanically pre-formed and placed into the tool by a robot. Then, with the help of a high-­pressure unit, cold water at 600-bar pressure is forced into the inside of the tube. This makes the tube bend by about five percent and adopt its ultimate and precise shape. In the case of cockpit carriers, the shaped tube becomes the crossbar between the A pillars to which the plastic parts are attached. 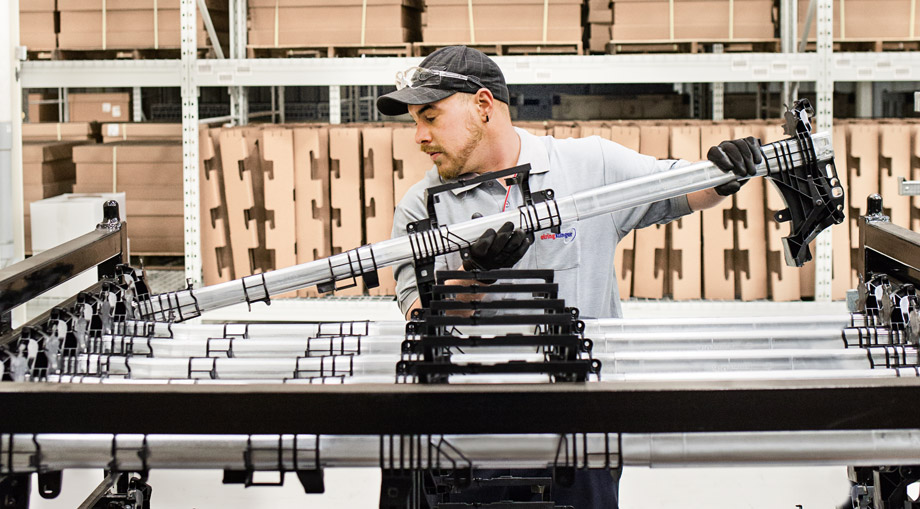 This part of the process is achieved by injection-molding within the same tool. Hot molten plastic at a temperature of 300 degrees Celsius is injected into the pre-formed aluminum tube, once again at a pressure of 600 bar. The counter-pressure exerted by the water inside the tube prevents the metal tube from collapsing during the molding process. Once the part has cooled and thus become dimensionally stable, it is removed by a robot and transferred to downstream processing steps. In this way, various plastic elements can be ­attached to the cockpit carrier and molded into their final shape in a single step.

Hydroform hybrid technology enables not just the production of cockpit carriers, but also lightweight front-end carriers and adapters, where elements like the head lamps and bumper covers are attached. ElringKlinger is currently preparing serial production of these vehicle parts at its Chinese and Canadian sites. Some more big challenges await Humphrey Chen and Thomas Bächle.