ElringKlinger set a course for tackling the challenges of transformation at an early stage. At a time when electromobility was seen as an idea embraced only by those with a visionary mindset, the Group was focusing on how it would be able to help shape mobility not only in the coming years but over a number of decades. The company’s current orders for its battery technology prove that adopting this farsighted, long-term strategy early on was the right move. As an established full-service supplier for electric drives, ElringKlinger combines many years’ experience with extensive expertise, allowing it to develop and manufacture a broad range of products from single components through to innovative end-to-end solutions.

ElringKlinger’s success in electromobility is down to a consistent strategy, highly motivated employees, and a knowledge base that has been steadily expanded over the years. Today, the Group makes many different products for lithium-ion batteries in cost-effective series production. To this end, a whole team of experts at the Dettingen/Erms, Neuffen, and Thale sites work on battery technology research, development, and manufacture. ElringKlinger’s goal in this segment is to be able to handle all the key processes apart from manufacturing the cells, always focusing on the interactions between components, module and system production and aligning its development and manufacturing processes accordingly.

Thanks to over ten years of expertise in battery technology, ElringKlinger is able to offer complete battery systems. In this context, the Group combines know-how in component production with smart battery management systems. Customers such as Piëch Automotive make extremely high demands of the battery system for the fully electric drives inside their vehicles – demands that ElringKlinger is able to meet thanks to the high level of innovation and performance offered by its product solutions. 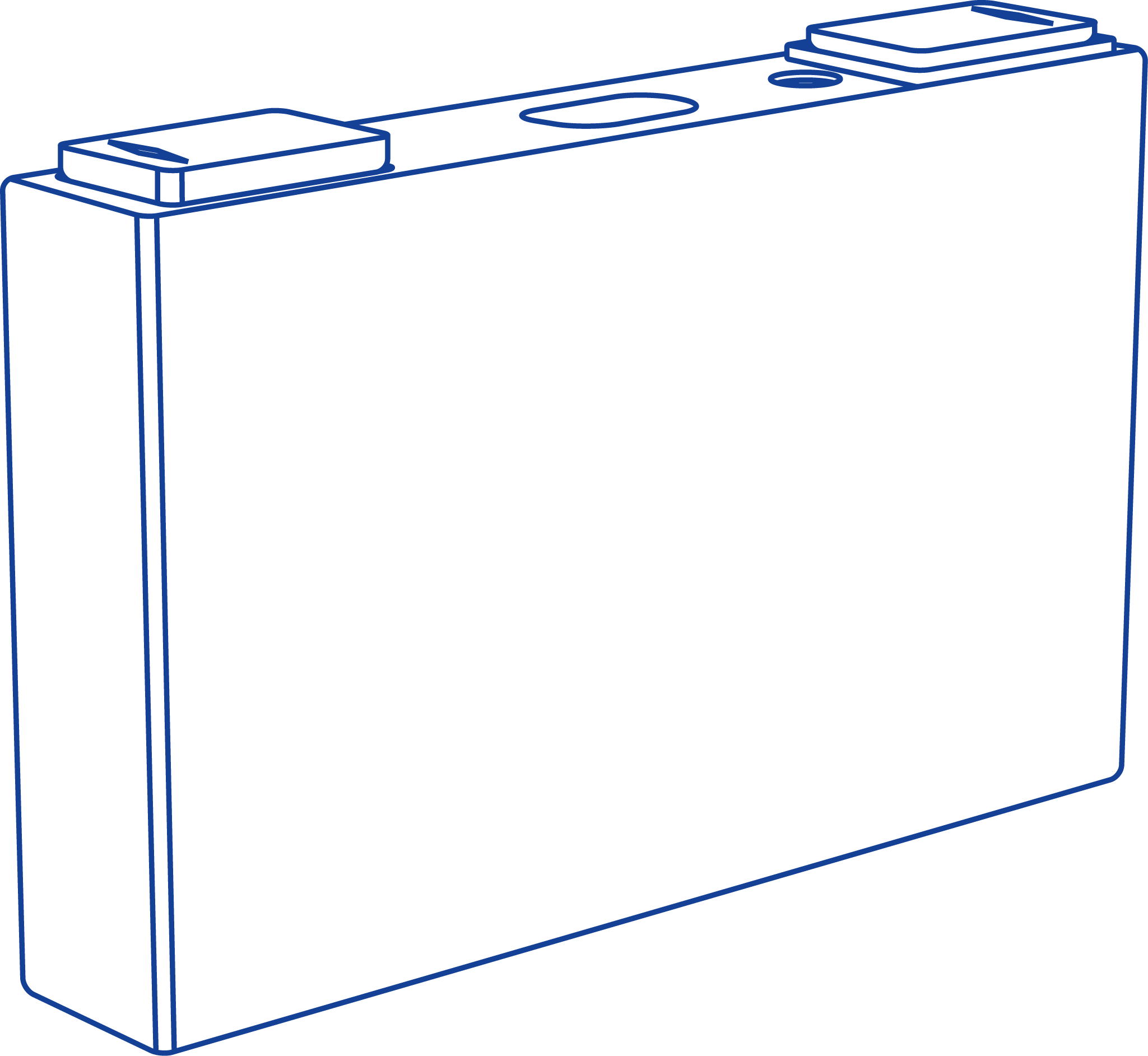 The exceptional reliability of ElringKlinger‘s cellular housings in large volumes is based on its experience with large series and its expertise in sealing and forming technology.

Piëch’s battery concept is based on a pack containing over 400 pouch cells, which forms the heart of the system together with the control unit. “We began implementing the first steps of Piëch’s battery system project in Neuffen back in late 2021,” explains Gunnar Deichmann, Vice President Battery Technology & E-Mobility. The real highlight of the concept from a technical perspective is how the voltage is switched from 800 V to 400 V. This allows the vehicle to be charged at 800 V, while a voltage of 400 V is used to drive it. The possible high charging rates can with this enormously reduce the time required for recharging. In addition, the innovative battery technology enables a range of 500 km with a capacity of more than 70 kWh. 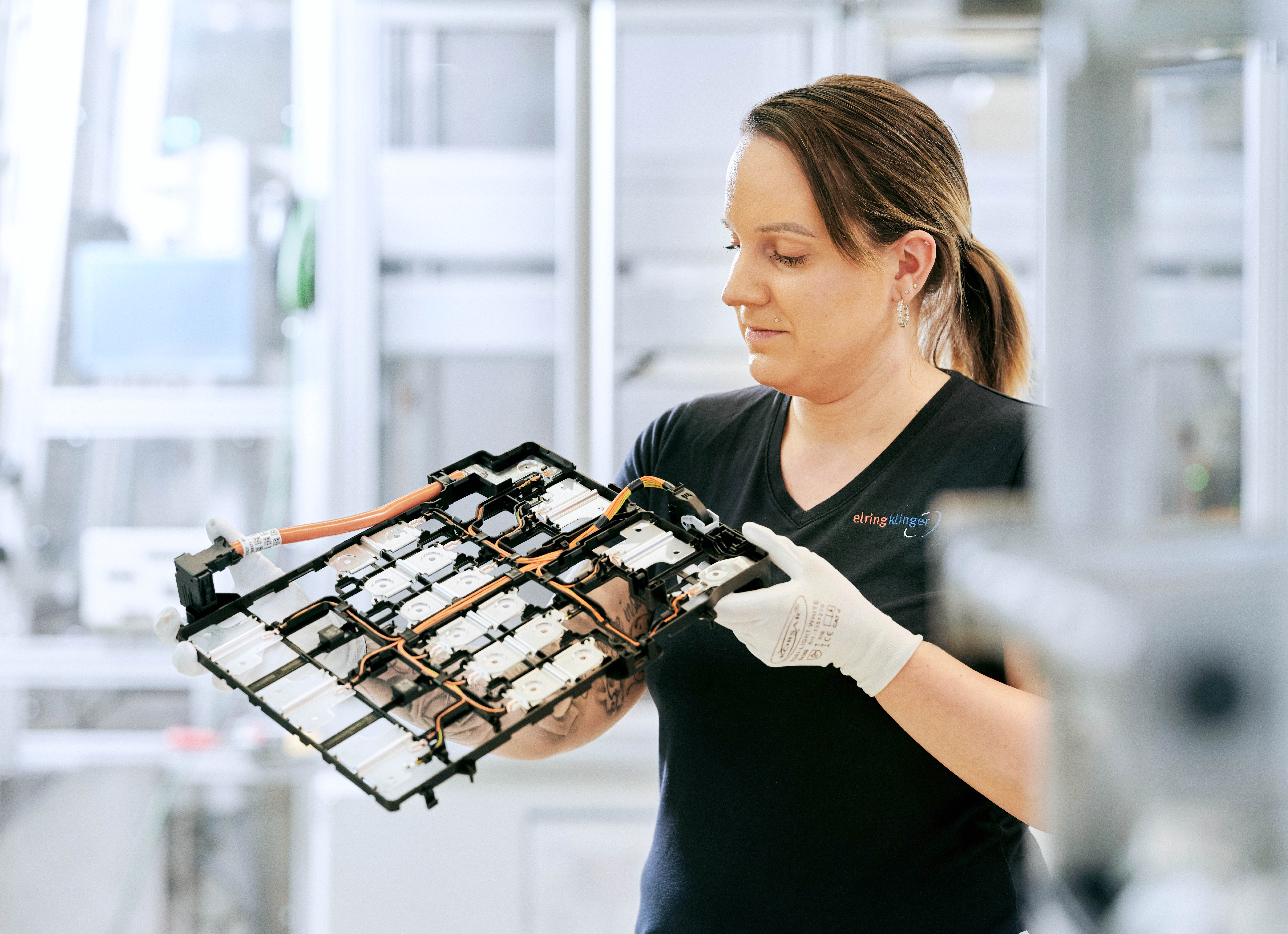 Numerous experts work at the sites in Dettingen/Erms, Neuffen and Thale in research, development and production relating to battery technology.

The current market situation requires a high degree of flexibility within the area of electric mobility. Elring Klinger offers here standardized components and systems within 400 V and 800 V system voltage. 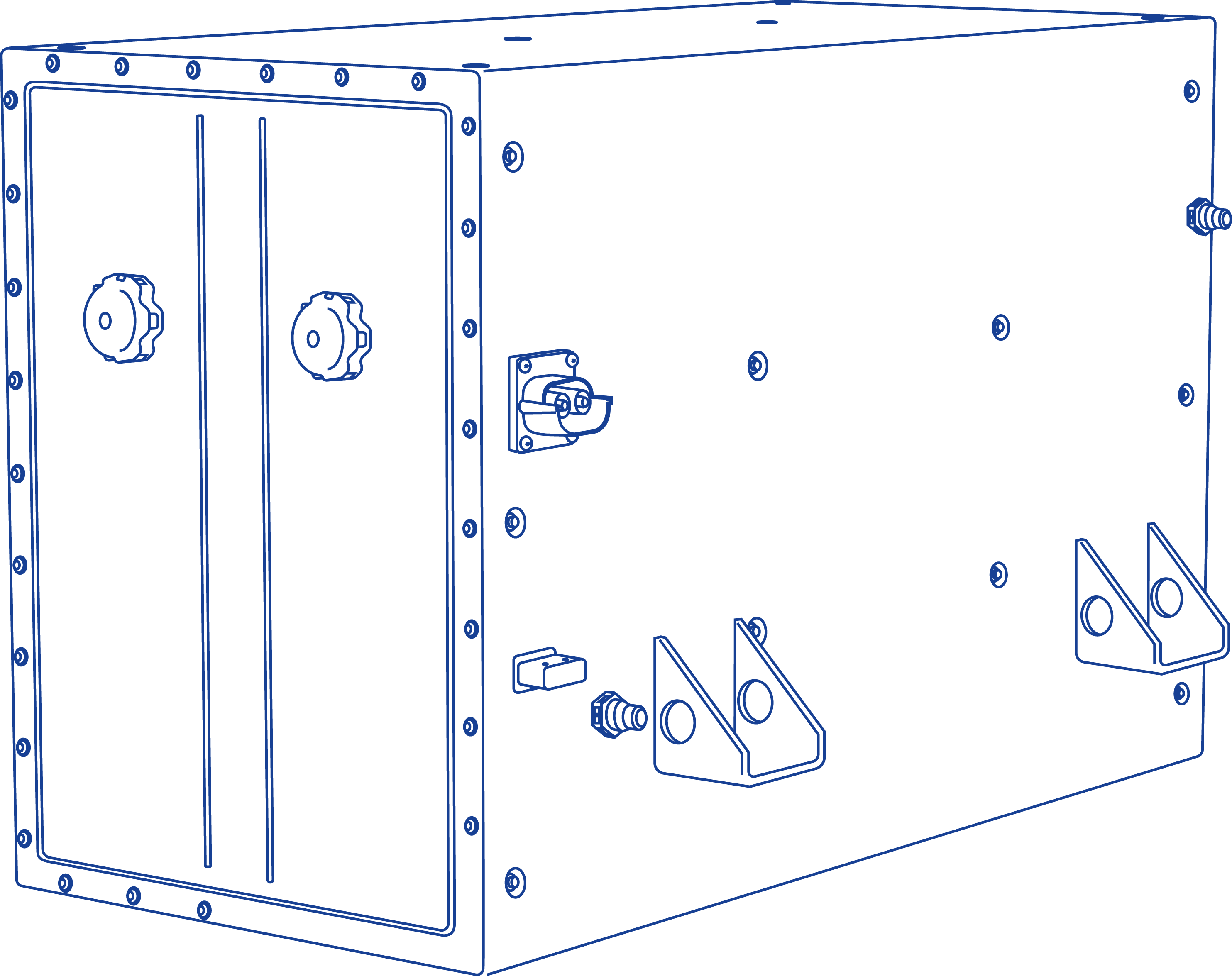 » Our innovative concept lets us do away with up to a quarter of the components. « 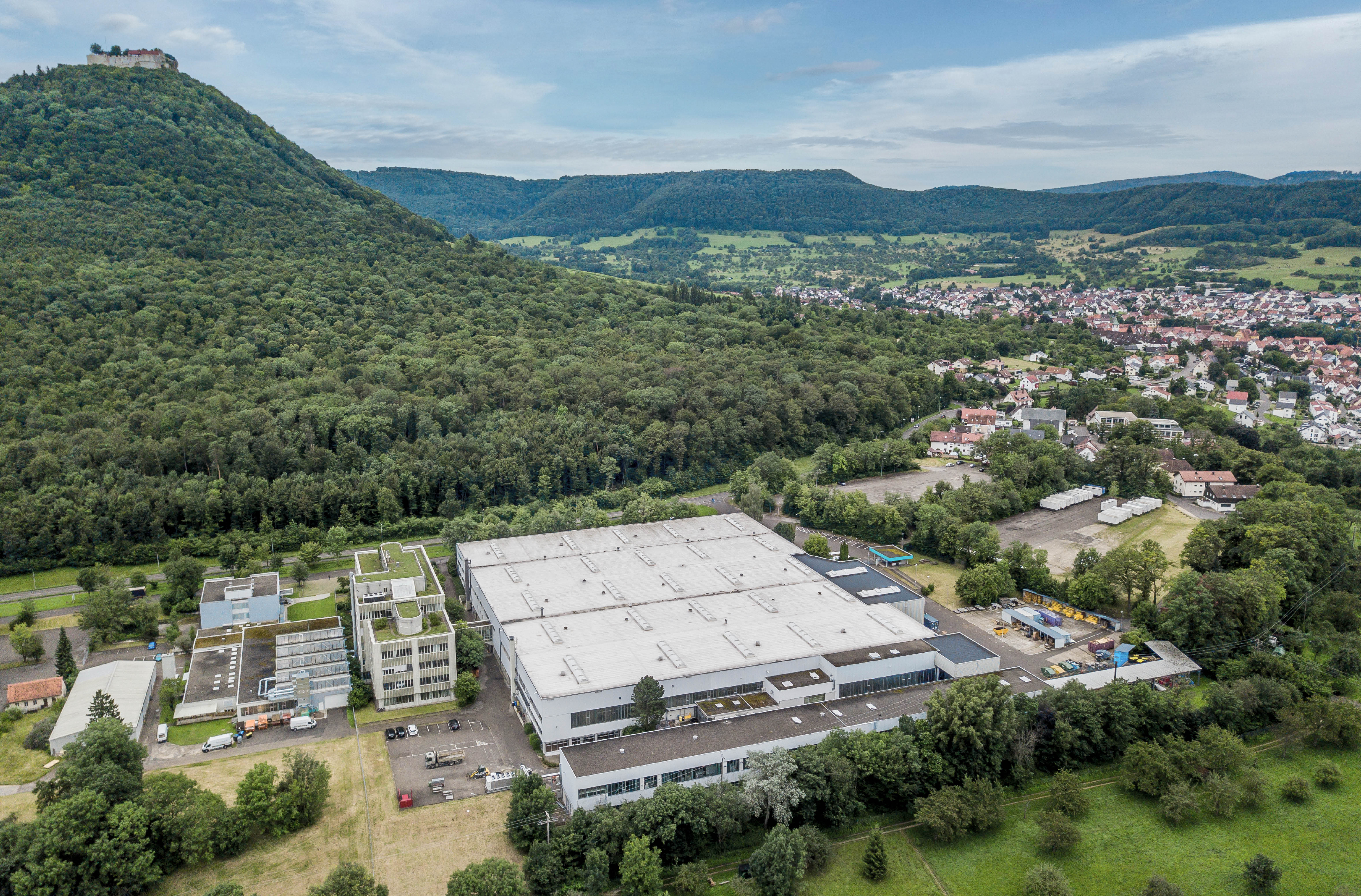 The first project steps for Piëch‘s battery system have already been implemented at the new competence center in Neuffen since the end of 2021.

A full-service supplier for battery technology

By setting its strategic focus at an early stage, ElringKlinger is now firmly established as a strong, innovative partner for battery technology. The sheer depth of the Group’s development operation gives it a key advantage when it comes to developing individ-ual components in line with customers’ specific needs and scaling them up for series manufacture. ElringKlinger has been mass-producing battery components since as long ago as 2011. In 2021, a large-scale order for cell contact systems from a global battery manufacturer for the series platform of a premium German vehicle manufacturer proved that its strategy was the right one.

Another good example of the groundwork that the Group has laid on its journey to becoming a leading supplier for battery technology is its new site in Neuffen, which opened its doors in 2021. The Group is pooling the unit’s various activities a stone’s throw from its headquarters in Dettingen/Erms. These include sales, development, model construction, industrial engineering, production quality, and project management. The site also offers ideal conditions for meeting the demands of the market, which continues to see strong growth. Battery technology is a key technology for the future that will play a central role in industrial value creation. Together with the fuel cell and electric drive units, it stands as a symbol of the Group’s transformation and its future. One building block in this strategy is the second battery IPCEI, entitled “European Battery Innovation – EuBatIn,” which is being coordinated by the German government and funded by it and the federal states. The European Commission gave the go-ahead to this joint European project in late January 2021 with the aim of creating a value chain for the battery industry in the EU.

A plastic carrier accommodates the cell connectors and ensures installability in all tolerance positions.

Cell contact systems are tailored precisely to customer requirements and can be fitted directly onto the cell combination and welded together accordingly.

At the heart of a Europe-wide value chain

As an innovative technology group in the battery technology segment, ElringKlinger was one of only eleven German companies chosen to be part of this European value chain. ElringKlinger’s project is geared toward the development and industrial-scale production of innovative battery cell housing components and stands to receive a total of EUR 33.8 million in funding. ElringKlinger’s innovative design for the cell lid allows fewer and less complex components to be used and reduces the need for energy-intensive raw materials such as aluminum and copper. To this end, the Group is putting its core skills to targeted use, such as forming, injection molding, coating technologies, and toolmaking. “Our innovative concept lets us do away with up to a quarter of the components,” Deichmann explains. “This means less manufacturing work and, combined with the reduced amount of material that’s required, shrinks the cell lid’s carbon footprint by some 40%.” With fewer components and an efficient assembly line, the reject rate is also much lower. ElringKlinger is thus making a sustainable contribution to climate-neutral battery cell manufacture in Europe.

The IPCEI – which stands for Important Project of Common European Interest – marks a further step on ElringKlinger’s journey toward securing a key position in the battery value chain. The Group has laid the right groundwork for achieving this objective over the past decade. Investments in its strategic, forward-looking areas and its many years of research and development work are thus paying off. Today, ElringKlinger is one of the few automotive suppliers that is ideally equipped for the technological transformation and as is the case in battery technology already has a mature, transformed product portfolio at its disposal – from single components through to the complete system. 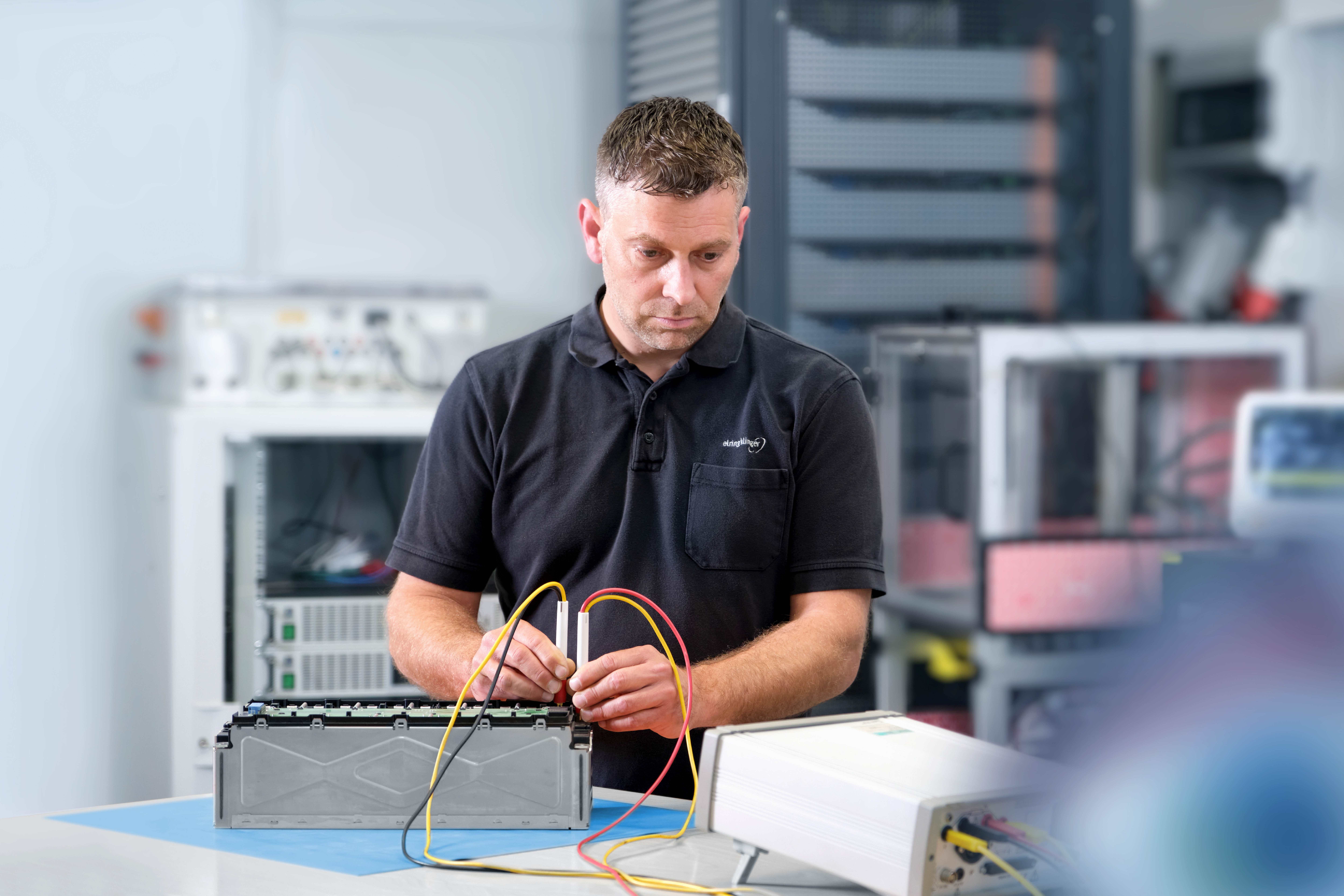 ElringKlinger offers everything from a single source in battery technology. From development and prototype production, testing through to series production.