If you are going to manufacture pioneering products, you always need to be a step ahead in toolmaking technology as well. This can rightly be regarded as one of ElringKlinger’s core areas of expertise. After all, its in-house toolmakers manufacture nearly all the necessary production tools themselves. Innovations and investments make sure that this competitive edge is maintained. 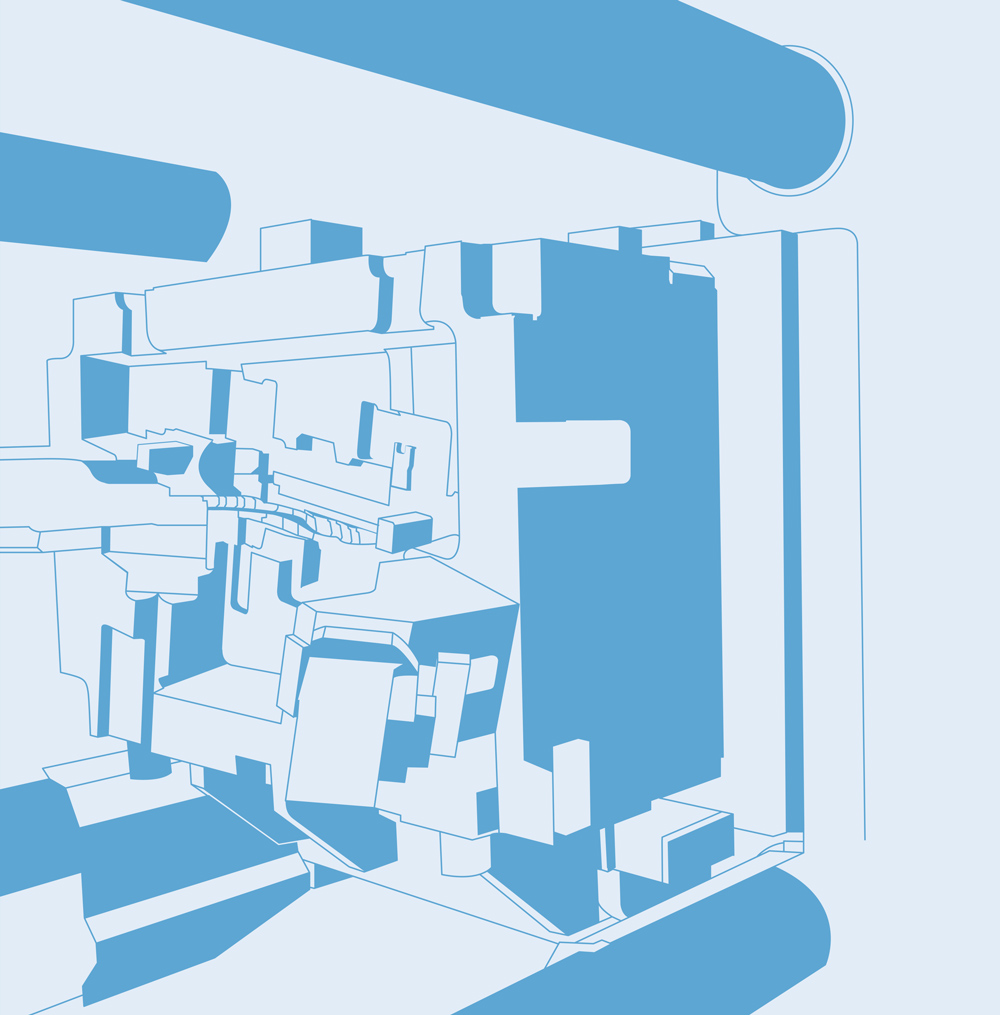 Its in-house toolmakers play a key role in ElringKlinger’s success, as they are behind nearly every high-performance tool used in production. The tools are planned, designed, and produced within the company to defined specifications, resulting in unique custom-made solutions that cannot be obtained anywhere on the market. The toolmaking department is therefore much more than just a service provider for ElringKlinger’s individual divisions and plants. It specializes in implementing technically complex 3D product geometries with ultra-precise shapes and dimensions as well as in continuously developing existing technologies and making them more efficient. Smart solutions enable ElringKlinger’s toolmakers to combine several so­phisticated manufacturing processes with one another. The best example is the hybrid hydroforming method, which melts plastic injection molding and internal high-pressure forming into a single process step. Jürgen Weingärtner, Head of Technical Service at ElringKlinger AG, has the following to say about the importance of in-house toolmakers: “In a nutshell, having in-depth tooling expertise determines whether new developments or new techniques can even get put into practice in the first place. ElringKlinger spot­ted this at an early stage and has made the most of it.” 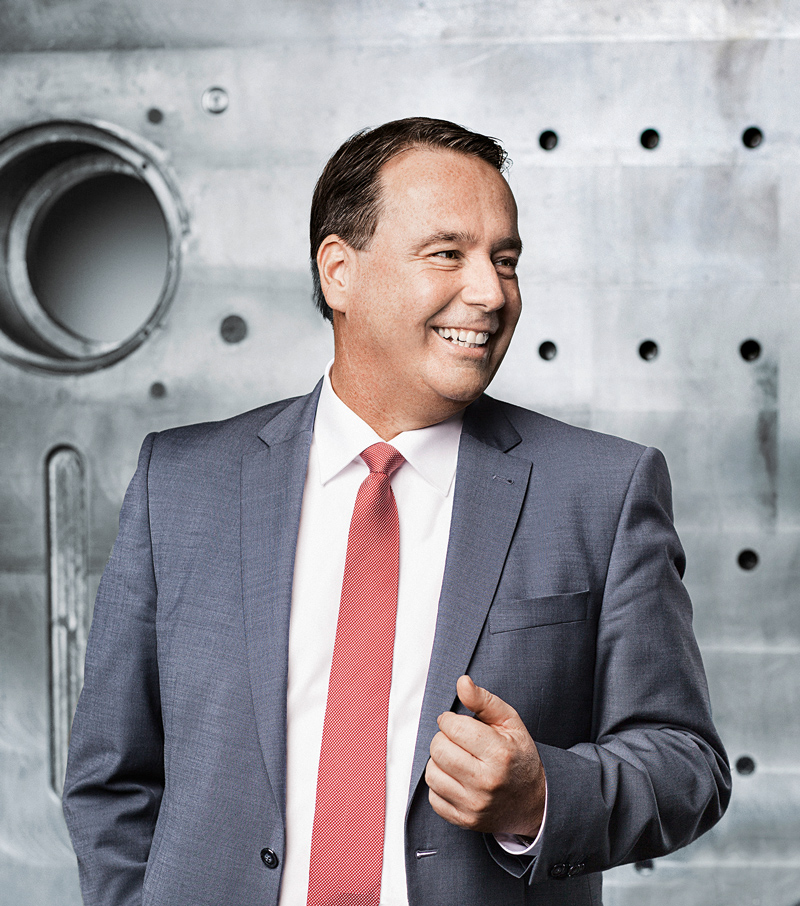 »Quality and speed are the key to success in toolmaking.«

Integrating toolmaking operations within the Group means that the entire process chain – from the product idea through to series production – can be covered under one roof, delivering three key benefits. First, product development and toolmaking are brought closer together. The individual requirements that new product-specific developments pose to toolmaking can be clearly defined in regular consultation meetings between the engineers from the two specialist departments and are easy to fine-tune if required without the need for any red tape. Second, each newly constructed tool serves as a learning experience that the team members immediately involved in the next project can benefit from. In other words, a process of continuous improvement sets in automatically. Third, production cannot run completely smoothly until the production line, the raw materials, and the process expertise are all in synch. “Once the toolmakers and the various interfaces at ElringKlinger are perfectly aligned, we can achieve a significantly higher output with our series production. You don’t usually get that if you outsource your tool work,” says Weingärtner, underlining the differences.

ElringKlinger’s toolmakers are responsible for developing and manufacturing tools for four different divisions – Cylinder-head Gaskets, Specialty Gaskets, Shielding Technology, and, in particular, the highly promising Lightweighting division. This latter is working on replacing metal parts with high-performance plastics to save weight in vehicles. For the series production of cockpit cross-car beams for a premium German manufacturer, which began in early 2015, ElringKlinger’s toolmakers developed the corresponding tools and supplied them to the Group’s sites in Leamington, Canada, and Suzhou, China. And two other major inter­national lightweighting projects that ElringKlinger launched in 2017 are also underpinned by the successful work of the Group’s in-house toolmakers. Both the order for door module carriers made from organo sheets received from a German automotive supplier and the supply of cockpit cross-car beams for a US car manufacturer used tools that were developed and manufactured in-house – they are currently still being tested. “For the door module carrier project, the sites in Hungary, Mexico, and China are each to receive two production lines plus corresponding toolsets,” Weingärtner adds. At the newly built production facility in the Californian city of Fremont, the first stage envisages the construction of a line to manufacture the cockpit cross-car beams. 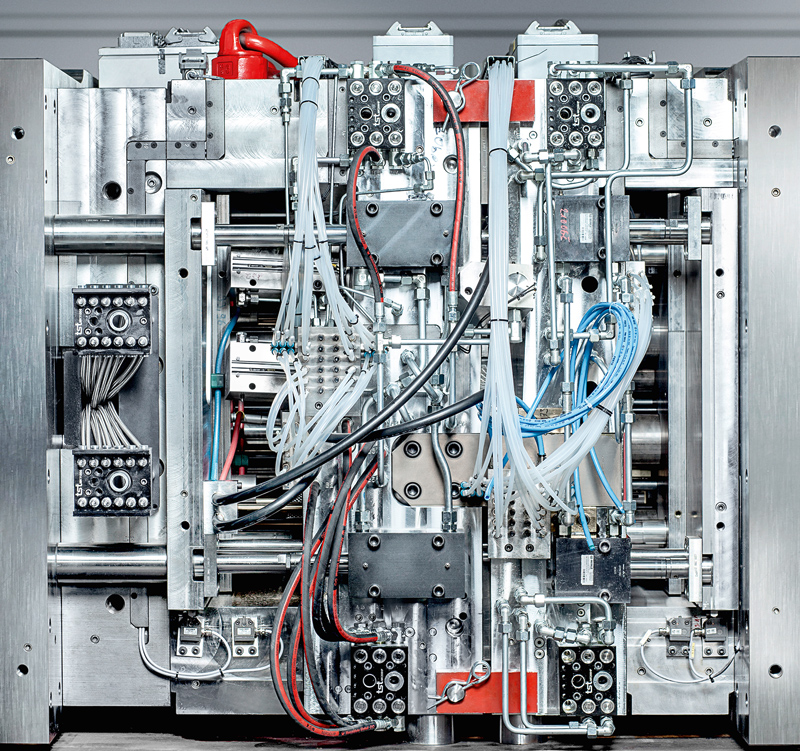 The illustration shows a combined forming and injection molding tool for producing hybrid components from organo sheets, i.e. fiber-reinforced plastic parts that boast maximum strength but have an ultra-low weight.

10,500 m2 is how much production space is available at the Lenningen plant, about the same size as two soccer pitches.

786 km is the distance between the site in Lenningen where the tool was manufactured and the production facility in the Hungarian city of Kecskemét.

“There are essentially two things that make ElringKlinger’s toolmakers so special and different from their frequently cheaper Asian counterparts: speed and quality,” Weingärtner explains. To ensure that its technological edge can continue to be maintained, the necessary operational and strategic measures are already being put in place for the future. For instance, the acquisition of the business activities of Maier Formenbau GmbH was completed in June 2016, further adding to ElringKlinger’s toolmaking skills and capacity. Purchasing the Bissingen/Teck-based mold-building and toolmaking company will bring the Group additional expertise in the form of some 40 toolmakers. The extra resources will mainly be used to accelerate the development and production of tools for the Shielding Technology division. Alongside this acquisition, expanding existing infrastructure is another key factor in the Group’s strategy for the future. The beating heart of toolmaking for lightweighting activities is in Lenningen, at the site of the former Hummel-Formen GmbH, which became part of the ElringKlinger Group in 2011. Over the past two years, the specialist for plastic injection molding and the processing of fiber-reinforced composites has seen a few changes – the site has been made fit for the future, in other words. With space having been at a premium for some time, the offices that had previously been housed inside the production hall were hived off to a new administrative complex that melds seamlessly onto the production facilities. This enabled the space that had become free to be used initially to expand production capacity. Investment was also made in new, state-of-the-art milling and processing machinery. In other words, the Group is investing in the future to preserve its competitive edge.