As the birthplace of the automobile and the home of automotive supplier ElringKlinger, the federal state of Baden-Württemberg in Germany is heavily dependent on the combustion engine in terms of industrial value added by enterprises within the region. At the same time, however, it is eager to project itself as a model for the future of mobility. State Premier Winfried Kretschmann and ElringKlinger CEO Stefan Wolf discussed how best to achieve this goal. 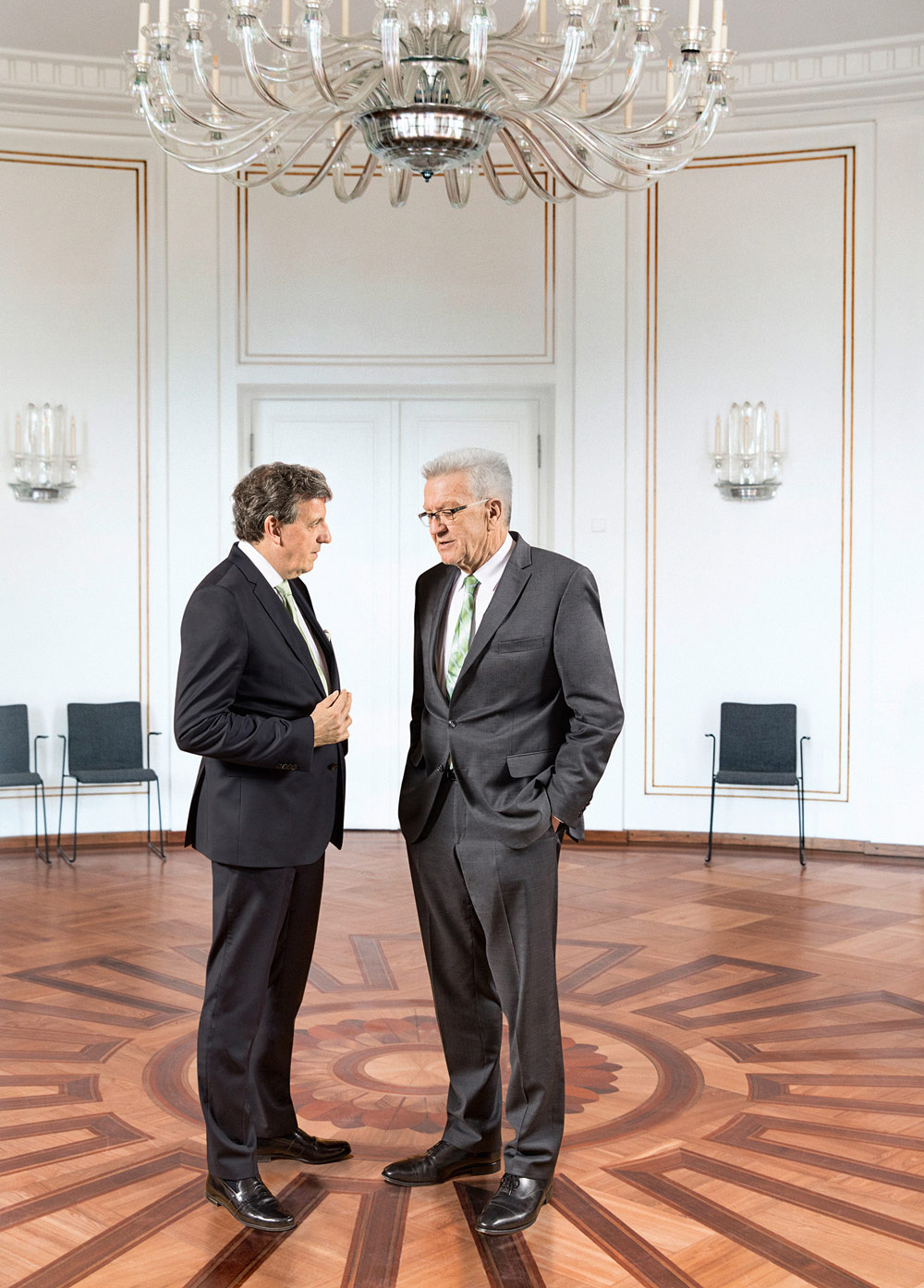 WOLF — According to the coalition agreement on which the federal state government is based, you intend to speed up the move towards e-mobility and other alternative drive systems. What kind of time frame are we looking at?

KRETSCHMANN — That’s a difficult question to answer. Ultimately, the level of demand for electric cars depends not just on policy decisions but on the extent to which they are accepted by consumers. The fact that electric vehicles have had a rather sluggish start is partly due to the price, but the main factor is the limited range of most models. I am convinced that demand will increase rapidly once our car makers release their new range of electric models. Bear in mind, too, that China is probably about to introduce a minimum quota system for electric cars.

WOLF — The momentum has certainly been there across every social group since autumn 2015. We need to build on it within the automotive and supplier industry and come up with faster solutions to those issues of range and battery capacity. At ElringKlinger, we have spent the last 15 years working on ground-breaking projects to develop new battery, fuel cell, and lightweight vehicle body components. Consistent lightweighting helps to extend the range of electric vehicles and is therefore becoming increasingly important.

KRETSCHMANN — Besides the shift towards electric drives, we have the prospect of autonomous driving, digital networks covering all transport providers, and the so-called platform economy, all of which are changing the way consumers behave. These are radical transformations, and yet here in Baden-Württemberg our value chains still depend very much on the combustion engine. It will be a monumental challenge to shape the transition in such a way as to preserve those value chains and the associated jobs. To do so, we need to establish a strategic partnership that allows policymakers and industry players to work together and continuously influence the process of change.

WOLF — You’re right, although it’s also up to each company to decide for itself how it responds to change in a way that enables it to remain competitive and retain or even create jobs. Ten years ago, for example, we were still generating 80 percent of our revenue from sales of gaskets for combustion engines. Today, that figure is around 20 percent. To bring about that change, we had to invest early in new technology, and we had to wait for that investment to pay off. Today, however, if the industry were to flip a switch and only produce electric cars from now on – admittedly an unrealistic scenario –, then we can at least be confident that our content per car would increase. Having said that, I think it’s right for car makers and industry suppliers to sit down with politicians to work out the best way forward together. We can only maintain our technological edge if we join forces.

KRETSCHMANN — We are at a crossover point towards a new technology. However, that also means our existing technology needs to keep on generating the revenue needed to finance investment in new technol­ogy. That is a challenging proposition, in particu­lar for small and medium-sized companies, especially given that we can’t yet say for certain which technology is going to emerge as the winner. There are several possibilities: batteries, fuel cells, third-generation fuels, and the hybrid as a transition technology. However, disruptive developments such as these are always associated with considerable risks. That’s why we need to avoid making new policies which generate even greater disruption on top of that created by those disruptive technologies. 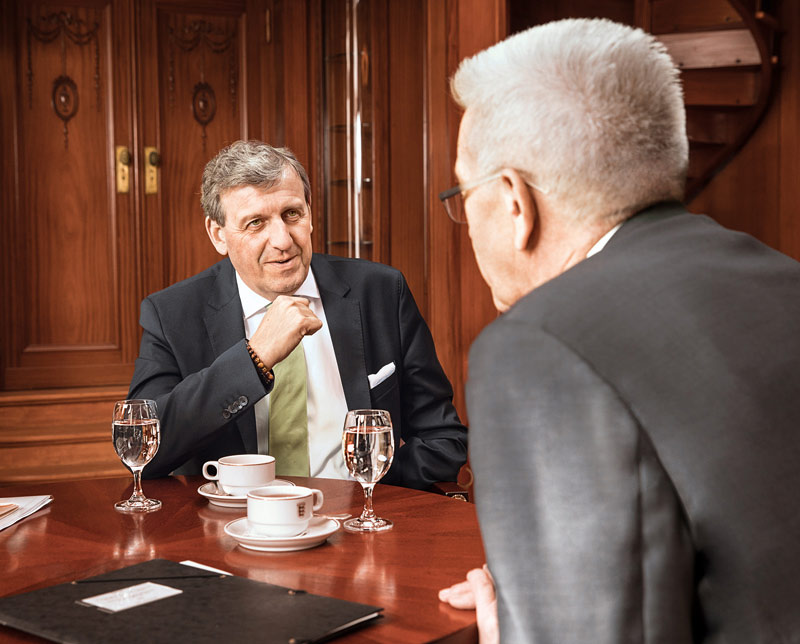 »We can only maintain our technological edge if we join forces.«

WOLF — So, will Baden-Württemberg remain the Silicon Valley of the automotive industry?

KRETSCHMANN — Our strength lies in the fact that here in Baden-Württemberg we have everything we need to continue playing a leading role in a very broad sense. Our businesses and their employees know what their customers want, and they are very familiar with the industrial processes involved. Of course, it’s worth mentioning that we don’t just do cars! Along the middle stretch of the Neckar region, we also have one of the best-developed transport systems. It all has to be coordinated. There are environmental issues at stake here, too. We can expect to see hundreds of millions of new cars being produced in the years ahead. If they are all based on the same technology that we are using at the moment, the effect on our planet would be disastrous.

WOLF — I am certain that we can continue to build on our strengths in the face of international competition. At the end of last year, for example, we acquired a stake in hofer, which had developed a complete electric drive. When hofer needed to ramp up its output to an industrial scale, it looked for a partner with the required production know-how. That is where we came in, and we have acquired a majority holding in the production company. We are supplying 3,000 drives as part of an initial small-scale order. Incidentally, we have opened a development office in Silicon Valley and have seen for ourselves how difficult it can be for pure software companies to move into production. We can form partnerships with companies like that to help them scale up to an industrial level.

»Our existing technology needs to keep on generating the revenue needed to finance investment in new technology.«

Winfried Kretschmann –
Premier of the Federal State of Baden-Württemberg 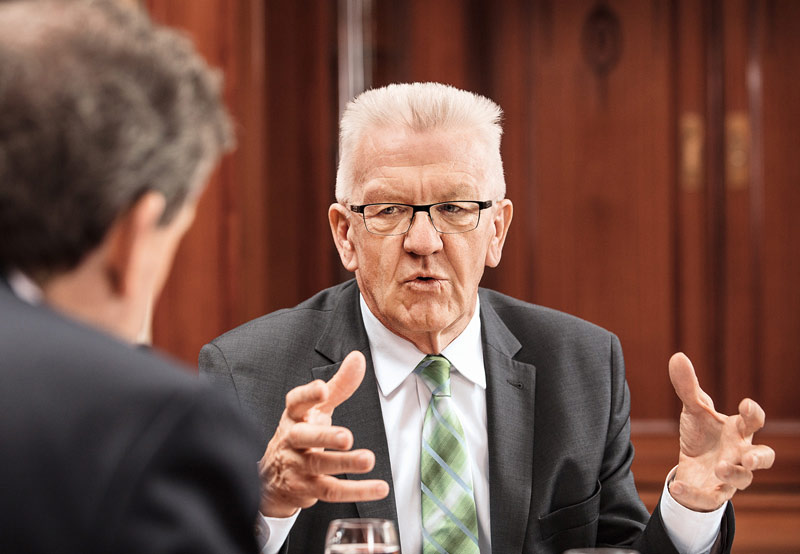 KRETSCHMANN — Here in Baden-Württemberg, we set up our own Cyber Valley in December last year, based on Silicon Valley in the United States. Research organizations, universities, large companies, and some SMEs are already there working on subjects such as arti­­ficial intelligence. We want to ensure that our knowledge and development base remains competitive at an international level. On the one hand, that involves attracting the best minds, those with creative skills. At the same time, we have to ensure that knowledge is transferred rapidly from the field of research to the businesses in question, including SMEs. We need to provide more support for start-ups, too. Of course, we can’t copy Silicon Valley, but it’s important that we strengthen our culture of innovation rather than become a culture that merely wants to avoid mistakes. Progress is simply not possible if you try and rule out every potential risk.

Winfried Kretschmann – premier of the federal state of Baden-Württenberg

A former biology and chemistry teacher, Winfried Kretschmann (born 1948) was one of the founders of the Grünen (Green Party) in Baden-Württemberg. He was first elected to the Landtag (federal state parliament) in 1980 and has remained a member ever since, with only a brief gap in the 1980s. In 2011, he became the first member of the Green Party to be elected to the office of State Premier. He was re-elected in May 2016.