The increasing number of vehicles with electric drives requires a widespread charging network.

The automotive production cell in Bietigheim-Bissingen. A large part of the parts for the automotive industry are produced here by around 120 employees.

The megatrend of environmentally friendly power is increasingly shining the spotlight on alternative technologies in the automotive industry. Conventional technologies are gradually being forced to give way. In response to the high levels of CO2 emissions, for example, the EU Commission has issued regulations for mobility. Besides strict specifications on emissions, this also includes a plan to outlaw the combustion engine by 2035. To prepare for this ban and revamp their own product range quickly, carmakers have stepped up efforts to develop alternative drives. See for yourself how ElringKlinger Plastics Technology is helping to make the e-motor more efficient.

Many of these use a so-called electric drive unit, or EDU, an electric motor and gear unit that is attached directly to the axle. The much higher rotational speeds in electric motors call for particular material properties in the requisite components. With the ElroSeal™ e-shaft sealing ring, ElringKlinger Kunststofftechnik GmbH has developed a unique solution that significantly reduces the load acting on the sealing system where it meets the lubricant-filled gearbox. The percentage of vehicles with an alternative drive unit being manufactured globally is already increasing considerably. While only 3.4% of newly registered cars in Germany were equipped with alternative drives in 2017, for example, the figure had jumped as high as 41.2% by the end of October 2021. Alternative drives are thus rapidly gaining market share. Looking a little closer at the different types of drive reveals that so-called mild-hybrids, i.e., vehicles powered by a combustion engine that supplies energy to an electric motor, are the most popular type of alternative drive. These are followed by “plug-in hybrid” vehicles, which have a combustion engine as well as a battery-powered electric motor. Instead of being generated solely by the combustion engine, the electricity required to run the electric motor also comes from a battery that is recharged via an external electric power source. The combustion engine will only charge the battery when it is short on power. However, it is the pure solution that would appear to have won the most people over: sales of battery-electric vehicles, i.e., those without a combustion engine, rose by 120% in 2021 – more than any other type.

»Our commitment in the
service of our customers is
underpinned by our role as
a technology partner in
demanding industry
sectors. Our solutions meet
the toughest day-to-day
requirements and will
continue to do so in future –
cost-effectively, sustainably,
and reliably. « 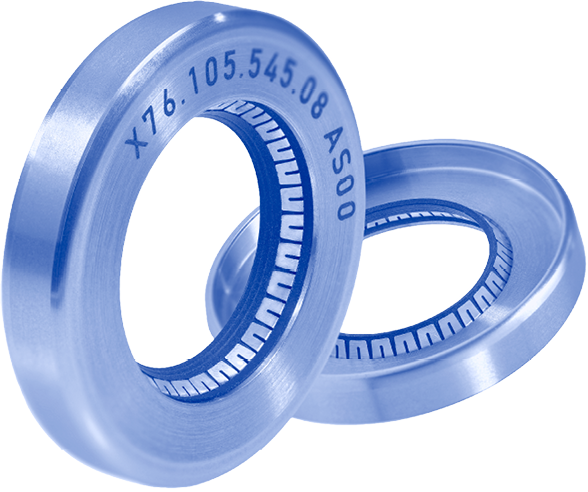 The ElroSeal™ E rotary shaft seal meets the increased requirements of the automotive industry and exceeds the the usual market requirements in terms of rotational speed and total mileage by 50%.

Manufacturing vehicles with a battery-powered electric motor poses particular challenges to a carmaker. Electric vehicle development is currently focusing on the faster rotational speeds inside the motor, combined with minimizing power loss and maximizing running performance. What does that mean specifically? Unlike a conventional combustion engine, an electric motor is powered by electricity, meaning no gasoline or diesel needs to be burned. Most electric vehicles are supplied with energy from a rechargeable lithium-ion battery consisting of four storage cells and forming the “traction battery” – individual accumulator cells connected up to make an energy storage system. This system delivers electricity to an induction motor, which is made up of two parts: the alternator and the rotary cylinder. Direct current is thus converted into alternating current. A rotating magnetic field is generated that produces the mechanical energy required to get the wheels moving via a gear system. A one-speed gearbox is usually used, whose sole purpose is to reduce and multiply rotational speeds.

Another component inside the gear system is a differential, which provides power transmission and can drive two wheels in such a way that they can rotate at different speeds in corners but with the same propulsion. The speed can be adjusted by changing the frequency of the power supply, which is determined in the inverter – the electric car’s “brain,” so to speak. The electrical drive axle itself has to be sealed using a high-performance gasket. This is where manufacturers set the pace: for instance, those involved are challenged to exceed the values for rotational speed and overall running performance that are standard on the market by 50%. Although this task may seem highly ambitious at first, ElringKlinger Kunststofftechnik GmbH found a solution: a new generation of PTFE-based radial shaft sealing rings developed by product, material, and process specialists working closely together. Besides the key performance characteristic described above, this new product family is capable of overcoming even more challenges set by the customer. Radial shaft sealing rings are used in the gear system, which contains a number of shafts. The rings “sit” on a shaft, e.g., in front of a gearbox housing, where lubrication takes place. This new, more powerful product family is available for the e-axle under the name “ElroSeal™.” 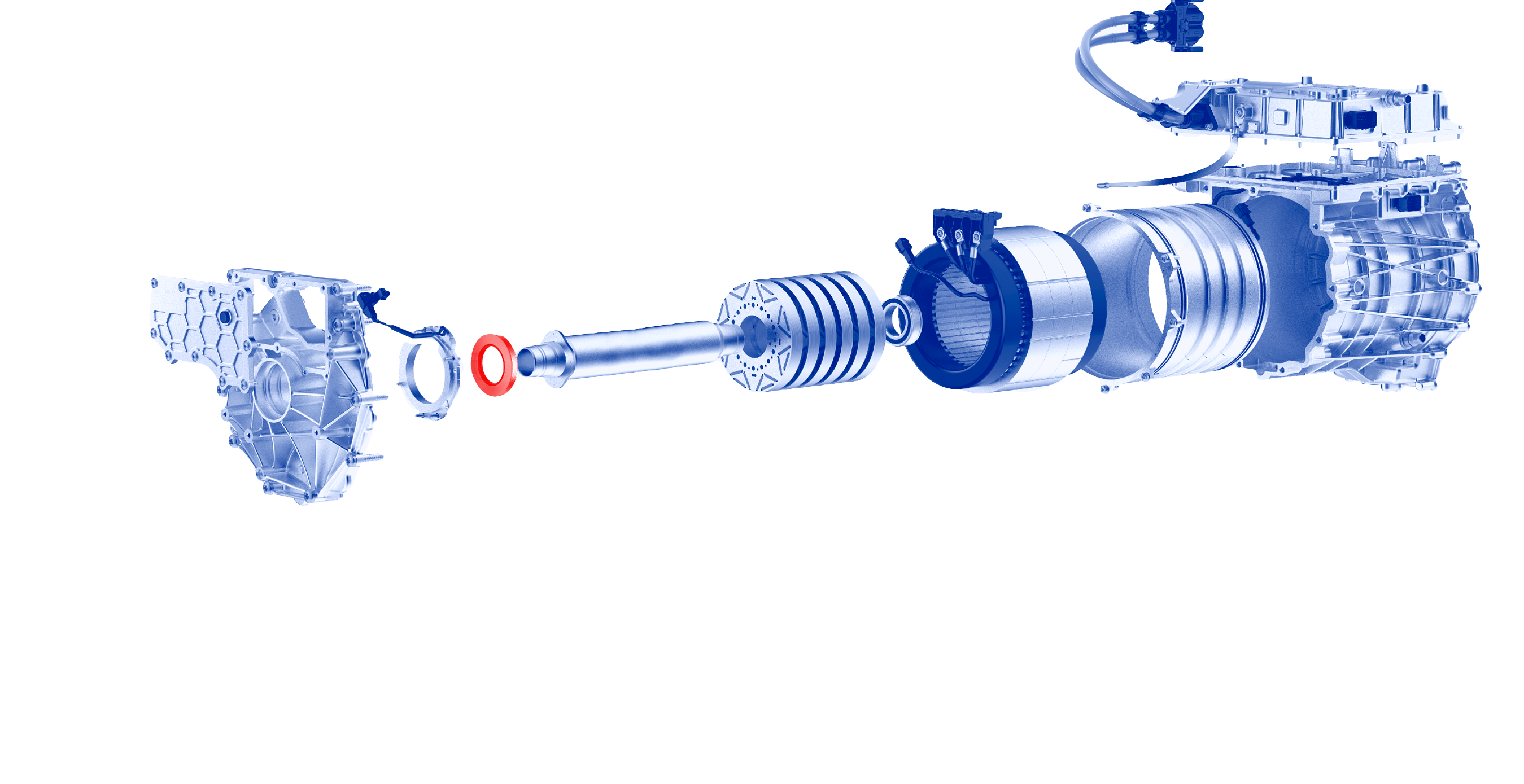 ElroSeal™ E shaft seals for the highest demands on wear and service life at very high speeds, as are possible in electric drives. Also suitable for dry running. Special forms with charge dissipation are also available.

Punch packaging in the rotor and stator. It ensures efficient operation in the electric motor.

» The ElroSeal™ E is
application-specific, i.e.
trimmed for optimum per-
formance at different
speeds and circumferential
speeds. This is how Elring
Klinger Engineered Plastics
manages to increase the
running performance of
electric motors. «

The ElroSeal™ E technology is based on an optimum combination of materials, geometry, and functional properties, all centered around the sealing lip made from ultra-hard-wearing PTFE compound. “PTFE” stands for polytetrafluoroethylene, an unbranched, linear, and partially crystalline polymer of fluorine and carbon. The PTFE compounds made from it boast many outstanding characteristics, which offer precisely the right solutions to specific technical problems. Their high continuous operating temperature and their virtually universal chemical resistance allow them to be used in extreme conditions. The sliding and friction behavior of Polytetraflon® PTFE is unique and is far superior to that of conventional materials.

The benefit for the automotive industry is obvious: by adopting an innovative design and using pioneering materials and manufacturing techniques, the customer can achieve up to 50% faster circumferential speeds while reducing power loss even more. This enables the efficiency of “e-axles” to be increased further and running performance improved. With these sustainable product properties, ElringKlinger Kunststofftechnik GmbH – one of the technological pioneers in the field of high-performance plastics – is making an active contribution to environmental considerations in the mobility sector. The ElringKlinger AG subsidiary is thus aligned seamlessly with the focus of Group, which is helping to shape the root-and-branch transformation under way in the automotive industry and can offer its customers solutions for sustainable mobility in every respect thanks to its extensive product range. The Group has been conducting research for 20 years and has been a series supplier of battery components for the past ten. Staying true to the motto “We want to get stuck in, not watch from the sidelines,” the successful development of the ElroSeal™ E – a fairly small product in physical terms – is a step in the same direction. It is yet another product that can help meet the demanding requirements of next-generation mobility and offer innovative, technologically sophisticated solutions to new challenges.